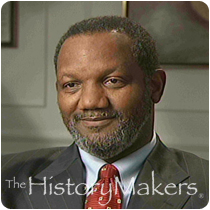 See how Solomon Brown Watson, IV is related to other HistoryMakers

Senior vice president and corporate general counsel to The New York Times, Solomon B. Watson IV was born on April 14, 1944, in Salem, New Jersey. In 1966, Watson graduated from Howard University with his B.A. degree in English. During the Vietnam War, Watson joined the U.S. Army. He served as a lieutenant in the military police corps from 1966 to 1968 and was awarded the Bronze Star and Army Commendation Medals. In 1968, while still in Vietnam, Watson took the LSAT and was accepted into Harvard Law School. Upon being discharged from the army in 1968, he entered Harvard Law School and graduated in 1971 with his J.D. degree.

After graduation, Watson worked as an associate in the Boston law firm of Bingham, Dana & Gould where he was one of their first minority lawyers. In 1974, he joined the legal department of The Times Company and became the assistant secretary of the company in December 1976, and secretary in July 1979. He was named assistant general counsel in 1984, general counsel in 1989, and senior vice president in 1996. With a twelve-lawyer staff, he supervises the paper’s litigation, copyright, and intellectual property issues and oversees acquisitions.

Watson has championed the cause of Vietnam War veterans exposed to Agent Orange. He was a member of the advisory board of the Agent Orange Settlement Fund, which was established to distribute funds to about ten million affected people. It was the largest class action settlement at its time. Watson was a participant in President Clinton’s Call to Action to the Legal Profession for Racial Equality and Pro Bono Services.

Watson served as chair of the Dinner Committee of the American Jewish Committee’s 1998 Judge Learned Hand Award Dinner and that same year he received the Pioneer of the Profession Award from the Minority Corporate Counsel Association. In 1999, he received the Distinguished Service Award from the Greater New York Chapter of ACCA. He is a member of One Hundred Black Men, Inc. and the Anglers’ Club of New York. In 2002, Watson was awarded the National Equal Justice Award by the NAACP League Defense and Educational Fund in honor of his professional accomplishments, commitment to public service and legal excellence. Watson is an avid saltwater fly fisherman.

See how Solomon Brown Watson, IV is related to other HistoryMakers
Click Here To Explore The Archive Today!