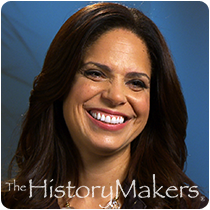 See how Soledad O'Brien is related to other HistoryMakers
Donate Now

Broadcast journalist Soledad O’Brien was born on September 19, 1966 in Saint James, New York. Her father, Edward, was a mechanical engineering professor; her mother, Estela, a French and English teacher. O’Brien graduated from Smithtown High School East in 1984, and went on to attend Harvard University from 1984 to 1988, but did not graduate until 2000, when she received her B.A. degree in English and American literature.

In 1989, O’Brien began her career at KISS-FM in Boston, Massachusetts as a reporter for the medical talk show Second Opinion and of Health Week in Review. In 1990, she was hired as an associate producer and news writer for Boston’s WBZ-TV station. O’Brien then worked at NBC News in New York City in 1991, as a field producer for Nightly News and Today, before being hired at San Francisco’s NBC affiliate KRON in 1993, where she worked as a reporter and bureau chief and co-hosted the Discovery Channel’s The Know Zone. Then, in 1996, O’Brien returned to New York to host MSNBC’s new weekend morning show and technology program The Site. Although The Site was cancelled one year later, O’Brien continued to work as a reporter and anchor for a number of shows, including MSNBC’s Morning Blend and NBC News’ Weekend Today until 1999, when she was named permanent co-anchor of Weekend Today.

In 2003, O’Brien left NBC and joined CNN as the co-anchor of the network’s flagship morning program, American Morning. In 2007, she moved to CNN’s documentary division, where she primarily worked on Special Investigations Unit and In America. From 2007 to 2013, O’Brien hosted a number of CNN documentary shows, including the Black in America series, the Latino in America series, and numerous Special Investigations Unit episodes. From 2012 to 2013, she anchored CNN’s Starting Point; and, in 2013, she established the Starfish Media Group production company, which has produced segments for CNN, HBO and Al Jazeera America. O’Brien was also hired by Al Jazeera America in 2013 as a special correspondent to the network’s America Tonight.

O’Brien has authored two books: 2009’s Latino in America, and the 2010 memoir, The Next Big Story: My Journey through the Land of Possibilities. In addition, she and her husband founded the Soledad O'Brien and Brad Raymond Starfish Foundation. O’Brien is a member of the board of directors of The After-School Corporation, the Harlem School of the Arts and the Foundation for the National Archives. She also served on the advisory board of Cyberangels, an internet safety organization.

O’Brien has received numerous awards, including the Emmy, the NAACP’s President's Award, the George Foster Peabody Award, an Alfred I. du Pont Award, and the Gracie Allen Award. In 2008, she was the first recipient of the Soledad O’Brien Freedom’s Voice Award from the Morehouse School of Medicine, and was the first recipient of The Johns Hopkins Bloomberg School of Public Health's Goodermote Humanitarian Award. O’Brien received the 2009 Medallion of Excellence for Leadership and Community Service Award from the Congressional Hispanic Caucus Institute. In 2010, she was named Journalist of the Year by the National Association of Black Journalists.

Soledad O’Brien was interviewed by The HistoryMakers on February 21, 2014.

See how Soledad O'Brien is related to other HistoryMakers
Donate Now
Click Here To Explore The Archive Today!