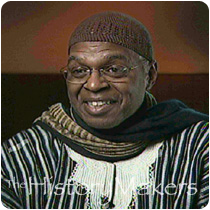 See how Sokoni Karanja is related to other HistoryMakers

Founding director of Chicago’s Center for New Horizons, Sokoni Tacuma Karanja was born Lathan Johnson on January 7, 1940, in Topeka, Kansas. He was raised in the Tennessee Town section of Topeka by his father, Hubert, a worker on the Santa Fe Railroad, and his mother, Florence, a nurse. McKinley Johnson, president of the Topeka NAACP and catalyst of Brown v. the Board of Education, also mentored Karanja. Karanja attended Buchanan Elementary School, Boswell Junior High School and graduated from Topeka High School in 1958. He attended Ft. Scott Junior College, where he starred in track, and he earned his B.A. degree from Topeka’s Washburn University in 1961. He received a masters degree in psychology from the University of Denver, another in social work from Atlanta University, and another in community planning from the University of Cincinnati. He received his Ph.D. degree in urban policy from Brandeis University, where he was assistant dean of students, in 1971.

Studying for his Ph.D. in Tanzania, East Africa, Karanja was influenced by Tanzanian president Dr. Julius K. Nyrere’s value-driven educational and developmental programs. There he received his name, which means “person from the sea who is willing to share knowledge.” As an Adlai Stevenson fellow at the University of Chicago in 1971, Karanja received funding for The Center for New Horizons. The center, which has twenty-two sites and serves over 2000 families, offers many services, including early childhood education, childcare, senior care, employment programs and leadership training.

A national leader on child development issues, Karanja is a task force member of the Council for Accreditation; executive committee co-chair of the Policy Council of the African American Family Commission; and an executive committee member of the Child Welfare League of America. He also serves on the Illinois Governor’s Task Force on Human Services and the boards of Leadership for Quality Education and Voices of Illinois Children. He chairs the Woodstock Institute and is co-chair of the Grand Boulevard Federation. In 1993, Karanja received a MacArthur Fellowship. Karanja is married to professor Ayanna Karanja and is the father of five children.

See how Sokoni Karanja is related to other HistoryMakers
Click Here To Explore The Archive Today!