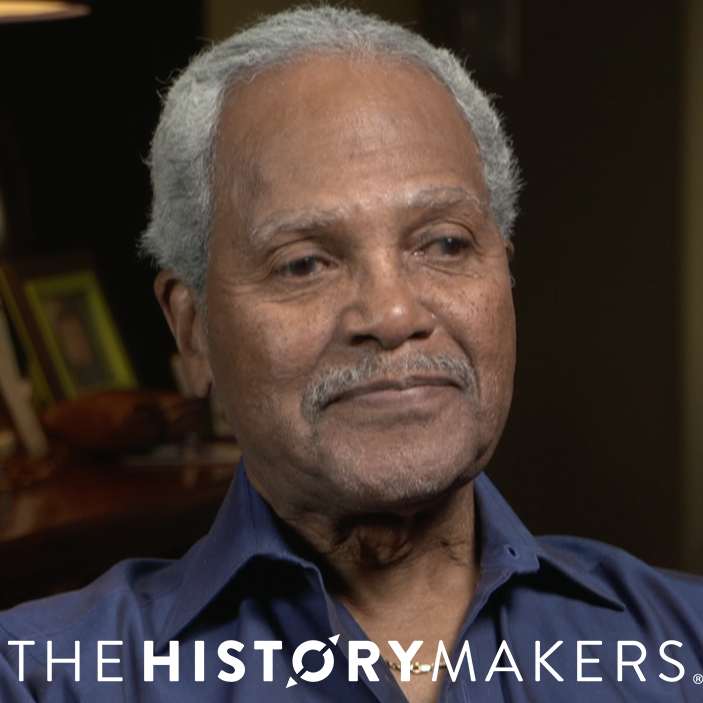 See how Skip Cunningham is related to other HistoryMakers
Donate Now

Entertainer Skip Cunningham was born on April 24, 1936 to Geneva Davis and William Henry Cunningham in Chicago, Illinois. He graduated from Morgan Park High School and attended the University of Illinois at Navy Pier, before transferring to Woodrow Wilson Junior College where he received his A.A. degree in 1956.

In 1941, at the age of five, Cunningham started tap lessons at the Sadie Bruce Dance School in the Bronzeville area of Chicago. Starting at the age of eight, he performed throughout the city and won several dance competitions. He visited California in 1956, where he won a talent contest that earned him a week-long engagement performing at the Moulin Rouge on the Sunset Strip in Los Angeles. In 1957, while still in Los Angeles, he was drafted into the U.S. Army and completed basic training at Fort Lewis in Tacoma, Washington. He was stationed at Fort Gordon in Georgia and Fort Banks in Winthrop, Massachusetts, where he found a talent agent and joined the American Guild of Variety Artists. In 1959, Cunningham completed his military service. He returned to Chicago, where he secured a role performing in the Billy Williams Revue. Over the next two years, the group toured Canada, New York, New Orleans and Las Vegas, where they established a six-month residency, before returning to New York City in 1961. Cunningham left the group and secured General Artist Corporation as his agent. During this period, he made appearances on television shows like On Broadway Tonight, The Merv Griffin Show, and The Tonight Show Starring Johnny Carson. As an entertainer, he performed with Tony Bennett, Nat King Cole, Bob Hope, Jerry Lewis, Richard Pryor, and Frank Sinatra. He was also a recording artist for such labels as Kapp Records, Coral Records, and Motown.

In 1968, Cunningham moved to Los Angeles, where he began performing on cruise ship circuits and making various television and movie appearances. Cunningham was featured on episodes of Sanford and Son and The Richard Pryor Show. He also performed briefly in Eubie! on Broadway and in a production of Evolution of the Blues at the Drury Lane Theater at the Water Tower Place in Chicago in 1980. In 1984, Cunningham worked on the films, The Cotton Club and later Taps, in 1989. Cunningham also worked for the Los Angeles Unified School District to teach performance arts and African American history. In 2002, Cunningham was cast in the David Whitfield production of Forgotten Treasures with Marla Gibbs and Lou Myers. Cunningham was then selected to perform for the 2003 Jerry Lewis Muscular Dystrophy Telethon, along with Fayard Nicholas, Arlene Kennedy and Arthur Duncan. Cunningham appeared with Century Ballroom Presents The Masters of Lindy Hop & Tap, before retiring from the stage in 2009.

Skip Cunningham was interviewed by The HistoryMakers on February 7, 2019.

See how Skip Cunningham is related to other HistoryMakers
Donate Now