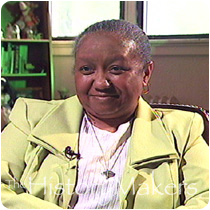 In 1985, Ralph graduated from Jersey City State College where she earned her degree in teaching. This same year she entered the Community of St. Joseph to begin her journey as a nun. There, Ralph became known as “Sister Patty” to her friends and the hundreds of students she’s taught. Currently, out of 1200 nuns, she is the only African American nun in the St. Joesph community.

In 1988, Ralph received and her first teaching assignment at St. Martin De Porres Catholic School in Philadelphia, Pennsylvania, where she taught first grade. Two years later, she was missioned to Holy Family Catholic School in Hilcrest Heights, Maryland where she was a first and second grade teacher. The following year, Ralph accepted a teaching position at Holy Name Catholic, School in Washington, D.C. She continued to teach at Holy Name for the next five years until she was named principal, a position she continues to hold today.

In 1994, she made her final vows in Chestnut Hill, Pennsylvania, thus completing her journey to become a nun. Surprisingly, her twin sister, Lynne Marie, decided to follow in Ralph’s footsteps and also became a nun although entering a different community, the Sisters of the Blessed Sacrament.

Ralph currently resides in Washington, D.C. Her twin sister is also a teaching nun at an elementary school in Memphis, Tennessee.

See how Sister Patricia Ralph is related to other HistoryMakers
Donate Now
Click Here To Explore The Archive Today!