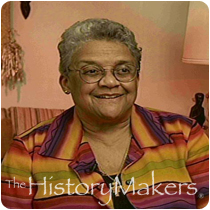 See how Sister Francesca Thompson is related to other HistoryMakers

Sister Francesca Thompson was born on April 29, 1932, in Los Angeles, California. Thompson’s parents were Evelyn Preer and Edward Thompson, who were founding members of the Lafayette Players in 1915. Her mother died at age thirty-five, when Thompson was just seven months old. Her father and grandmother raised her in Indianapolis, Indiana. Her lower middle class upbringing was atypical. Thompson’s grandmother, Susan Knox, was a Democratic ward captain, so Thompson was exposed to the city’s politicians, clergymen and judges who visited their home. Her father’s friends, who included such entertainment luminaries as Paul Robeson, Ruby Dee, and Eubie Blake, also influenced her.

Though raised in the African Episcopal Church, Thompson became attracted to Catholicism while attending St. Mary’s Academy, which in the 1940s was the only private secondary school in Indianapolis that would accept African Americans. Won over by the ritual and the drama of the Catholic faith, Thompson joined the Sisters of St. Francis of Odenburg, Indiana, in 1952. She received her B.A. degree in 1960 from Marian College and her M.A. degree in education from Xavier University. Thompson earned her PhD degree in speech and drama from the University of Michigan, writing her thesis on the Lafayette Players. She coached several budding actors while at the University of Michigan, including Gilda Radner and Christine Lahti.

Her doctoral dissertation helped Thompson become chairperson of the Drama/Speech Department at Marian College, where she taught from 1966 to 1982. In 1982, she began a twenty-four year association at Fordham University, where she was associate professor of African and African American Studies and assistant dean/director for Multicultural Programs. Thompson has celebrated her fiftieth anniversary as a Sister of St. Francis. She has twice served as a member of the prestigious nominating committee for Broadway’s Tony Awards, and has been inducted to The College of Fellows of the American Theatre. In 2002, Thompson received an honorary doctorate of fine arts at Fordham University’s 157th commencement.

See how Sister Francesca Thompson is related to other HistoryMakers
Click Here To Explore The Archive Today!