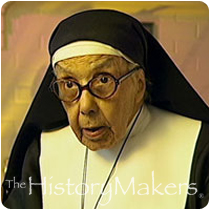 See how Sister Constance Murphy is related to other HistoryMakers

Born in Baltimore on February 2, 1904, into a middle-class family in the newspaper publishing industry, Sister Constance Murphy elected not to stay in the family business. After graduating from high school, Murphy moved to Philadelphia to attend the University of Pennsylvania, where she graduated with a B.S. in education in 1928. She would later return to school at the University of Michigan to earn a master's degree at the age of seventy-three.

Murphy felt her religious calling most strongly after attending a passion play in Oberammagau, Germany in 1930. Returning to Baltimore, she attended a presentation by the Sisters of St. John the Divine, an Anglican order of nuns based in Canada, in 1932. Four years later, she traveled north to Toronto to join the order. In 1938, she was sent to teach at the Qu'Appelle Diocesan School in Regina, Saskatchewan, Canada. While there, she rose to the position of headmistress and returned to the Toronto convent in 1955. Murphy was named administrator of the Church Home for the Aged in Toronto in 1958, a position she held until 1972.

At the age of ninety-four, Murphy published a book of her memoirs, Other Little Ships, and a year later visited the Holy Land for the first time. She has also co-authored several books of prayer and hymns. Murphy has been honored for her work on many occasions and continues to work diligently today. On her 105th birthday Murphy was recognized as the oldest American in Canada by Consul General John R. Nay.

See how Sister Constance Murphy is related to other HistoryMakers
Click Here To Explore The Archive Today!