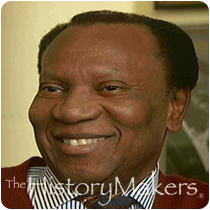 See how Simon Estes is related to other HistoryMakers

Renowned opera singer and educator Simon Estes was born on March 2, 1938, in Centerville, Iowa. Estes is the youngest of three siblings. Raised in a spiritually-centered family, Estes sang in his church choir as a young boy and throughout his young educational years.

Estes began his university career as a pre-med student in 1957 at the University of Iowa. In 1961, a voice teacher, Mr. Charles Kellis, heard Estes sing in one of the university choirs. Kellis introduced Estes to several classical recordings which led Estes to change his professional career path to singing. Upon graduating from the University of Iowa, Estes enrolled in the Juilliard School in 1964. In 1965, he received a music grant from the NAACP and the New York City Trust Fund to audition for the role of Ramfis in Aida. Estes was cast in the role, and made his professional debut at the Deutsche Opera in Berlin. He later won third prize in the Munich International Music Competition in 1965 and the bronze medal at the 1966 Tchaikovsky Competition in Moscow. Also in 1966, President Lyndon B. Johnson invited Estes to sing at the White House.

Estes has performed at many major opera houses around the world, and with top opera singers including Leontyne Price and Luciano Pavarotti. Some of his most memorable operatic performances have been performing for Archbishop Desmond Tutu in Cape Town, South Africa, and in The Flying Dutchman and Porgy and Bess. Estes also sang at the 1999 Nobel Prize Committee where he was introduced to Nelson Mandela.

See how Simon Estes is related to other HistoryMakers
Click Here To Explore The Archive Today!