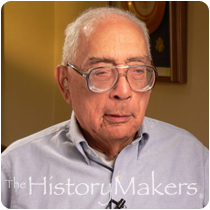 Magazine and newspaper reporter Simeon Saunders Booker, Jr. was born on August 27, 1918, in Baltimore, Maryland to Roberta Waring and Simeon Saunders Booker, Sr., a YMCA director and minister. After his family moved to Youngstown, Ohio, Booker became interested in journalism through a family friend, Carl Murphy, the owner and operator of Baltimore's The Afro American Newspapers. In 1942, after receiving his B.A. degree in English from Virginia Union University in Richmond, Booker took a job at the The Afro American Newspapers as a young reporter. In 1945, he moved back to Ohio to work for the Call and Post. Five years later, Booker was the recipient of the Nieman Fellowship from Harvard University to study journalism and develop his talent as a reporter. After leaving Harvard in 1951, Booker became the first full-time black reporter at The Washington Post.

In 1954, Booker was hired by the Johnson Publishing Company to report on current events in its weekly digest, Jet. In 1955, Booker helped to redefine the role of Jet and the entire Civil Rights Movement with his famous coverage of the Emmett Till murder and trial, turning an all too familiar event in the Deep South into a national tragedy that united the black community. Booker remained on the dangerous front lines of the Civil Rights Movement, reporting on the 1957 integration of Central High School in Little Rock, Arkansas. In 1961, Booker rode with the Congress on Racial Equality (CORE) Freedom Riders through the Deep South. When the buses were fire bombed in Anniston, Alabama, Booker arranged the Freedom Riders’ evacuation with U.S. Attorney General Robert F. Kennedy. Continuing his work of in-depth reporting, Booker toured Vietnam and interviewed General Westmoreland for Jet in the mid-1960s. In 1964, Booker outlined the importance of the ongoing Civil Rights Movement in his book, Black Man’s America.

Booker covered every Presidential election since the Eisenhower Administration in his fifty-three years with Johnson Publishing until he retired in 2007. In 1982, Booker received one of the most prestigious awards in journalism, the National Press Club’s Fourth Estate Award.