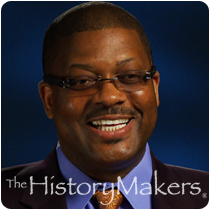 See how Sidney Green is related to other HistoryMakers

Basketball player and college basketball coach Sidney Green was born on January 4, 1961 in Brooklyn, New York. He starred on his high school basketball team at Thomas Jefferson High School. In 1979, Green, a graduating senior, was a McDonald’s All-American selection and named the New York City Player of the Year. He chose to attend the University of Nevada at Las Vegas with a four-year athletic scholarship where he played under head coach Jerry Tarkanian. In 1983, Green was an NCAA All-American selection and he graduated that year with his B.A. degree in sociology. Green was the all-time leading rebounder and second all-time scorer in the history of the UNLV men’s basketball team.

Green was the fifth pick in the 1983 NBA Draft, where he was chosen by the Chicago Bulls to play power forward and played alongside basketball super star Michael Jordan. Green had a successful career in the NBA and went on to play for the Detroit Pistons, the New York Knicks, the Orlando Magic, the San Antonio Spurs, and the Charlotte Hornets before retiring from the league in 1993. In 1995, Green returned to basketball as head coach of the men’s basketball team at Southampton College in Long Island, New York. Despite inheriting a team that had won just six games the year before, Green led his team to twenty-nine wins and twenty-seven losses during his two years as head coach. In 1997, Green went on to coach at the University of North Florida, where he increased the team’s winning percentage by more than thirty percent. Florida Atlantic University hired Green as its head coach in 1999. He took his team to the first Atlantic Sun Conference championship in 2002, where he was named the A-Sun Coach of the Year. Green was hired as an assistant coach at the University of Indiana in 2005 and in 2009, the Chicago Bulls named him the team ambassador.

While in college, Green co-founded Shoot for the Stars Foundation in Las Vegas, Nevada. During his time with the Knicks in New York, Green participated in Governor Mario and Matilda Cuomo’s Mentor Program as a spokesperson in public schools. He also founded Sid’s Kids in Orlando, Florida while he played with the Orlando Magic. In 1989, Green received the NBA National Spirit of Love Award, given to the NBA player who has contributed significant time and energy to the community. Green’s jersey was retired by the UNLV basketball team, and he was inducted into the UNLV Hall of Fame in 1994.

Green and his wife, Deidra, have two children, LaShawn and Taurean. Taurean has also played in the NBA.

Sidney Green was interviewed by The HistoryMakers on April 18, 2012.

See how Sidney Green is related to other HistoryMakers
Click Here To Explore The Archive Today!