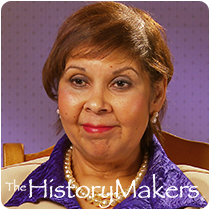 See how Sidmel Estes is related to other HistoryMakers

Media consultant and executive television producer Sidmel Estes was born on November 27, 1954 in Marysville, California, to Emellen Estes and Sidney Estes. Estes attended elementary and high school at public schools in Atlanta. She earned her B.S.J. degree in 1976, and her M.S.J. degree in 1977, both from Northwestern University’s Medill School of Journalism in Chicago, Illinois.

In 1979, Estes returned to Atlanta and was hired at WAGA-TV/Fox 5, where she served as the executive producer of numerous programs. She was the co-creator and executive producer of Good Day Atlanta, which became the number one show in its market, and won seven Emmy Awards under her direction. In 2006 Estes left WAGA-TV in order to found and serve as CEO of BreakThrough Inc., a media consulting firm whose clients include the Frederick Douglass Family Foundation, the McCormick Tribune Fellows Foundation, the Tupac Amaru Shakur Foundation and the Atlanta Center for Creative Inquiry. She has also taught as an adjunct professor at Emory University and Clark Atlanta University.

In 1991, Estes was elected the first woman president of the National Association of Black Journalists (NABJ). Under her leadership NABJ increased its membership to over 2,000 journalists and was included in Ebony’s list of Top 100 Black Organizations. In 1994, she was a leader and co-creator of the first Unity Conference, an alliance of journalists of color, and was instrumental in the release of their report Kerner Plus 25: A Call For Action, which outlined steps the media industry should take to improve racial diversity.

During her prolific career in television and journalism, Estes has been recognized numerous times. Atlanta’s Mayor Andrew Young proclaimed “Sidmel Estes-Sumpter Day” on November 18, 1988 after she was named Media Woman of the Year by the Atlanta Chapter of the National Association of Media Women. She was featured in Ebony’s 100 Most Influential Black Americans in 1993, and in More Magazine’s book 50 Over 50. Estes was honored with the Silver Circle Award from the Television Academy and has won several Emmy Awards. She received Northwestern University’s Alumni Service Award after being elected as president of the Northwestern Black Alumni Association in 2004.

Estes married B. Garnett Sumpter in 1983, and they had two children, Joshua and Sidney.

Sidmel Estes was interviewed by The HistoryMakers on February 17, 2014.

See how Sidmel Estes is related to other HistoryMakers
Click Here To Explore The Archive Today!