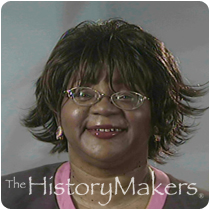 Favorite Color:
Turquoise
Favorite Food:
Chocolate Cake
Favorite Time of Year:
Spring
Favorite Vacation Spot:
Hawaii
Favorite Quote:
No One Will Save Us But Us.

Favorite Color:
Turquoise
Favorite Food:
Chocolate Cake
Favorite Time of Year:
Spring
Favorite Vacation Spot:
Hawaii
Favorite Quote:
No One Will Save Us But Us.

See how Shirley Jean Wilcher is related to other HistoryMakers

Affirmative action specialist Shirley Jean Wilcher was born July 28, 1951, in Erie, Pennsylvania. Raised by her grandmother and her uncle Marcus, Wilcher attended Lane Elementary School and West Junior High School in Akron, Ohio. After moving to Boston, Wilcher attended Patrick T. Campbell Junior High and eventually graduated from Girls Latin High School in 1969. Mt. Holyoke College presented Wilcher with the opportunity to live in Paris, where she was influenced by the work of Franz Fanon. Graduating in 1973 with her B.A. degree in French and philosophy, Wilcher earned her M.A. degree in urban policy and policy analysis from the New School for Social Research in 1976. Wilcher spent 1977 and 1978 with the NAACP Legal Defense Fund in New York and San Francisco during the Allen Bakke Case. Wilcher, who would go on to earn certificates in alternate dispute resolution, diversity training, and labor arbitration, was awarded her J.D. degree from Harvard Law School in 1979.

A staff attorney for Proskauer Rose Goetz and Mendelsohn in 1979, Wilcher moved on to serve as staff attorney at the National Women’s Law Center from 1980 to 1985. From 1985 to 1990, Wilcher served as associate counsel for civil rights for the House Committee on Education and Labor investigating civil rights cases at OEO and various government agencies. Wilcher was director for State Relations and general counsel for the National Association for Independent Colleges and Universities from 1990 to 1994. From 1994 to 2001, Wilcher served as the Deputy Assistant Secretary of the U.S. Department of Labor Employment Standards Administration where she won $275 million for women, minorities, people with disabilities, and veterans. From 2001 to 2003, Wilcher was executive director of Americans for a Fair Chance, a consortium of six civil rights legal organizations that was formed to serve as an educational resource and advocate for affirmative action; in 2003, the United States Supreme Court upheld affirmative action. In 2001, Wilcher formed Wilcher Global LLC to help organizations reach diversity goals.

A twenty year veteran of legal affirmative action battles, Wilcher received the NAACP Benjamin Hooks Award, the Keeper of the Flame Award, and the American Association for Affirmative Action’s Rosa Parks Award in 2004.

See how Shirley Jean Wilcher is related to other HistoryMakers
Click Here To Explore The Archive Today!