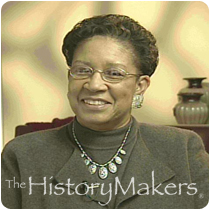 Favorite Color:
Winter White
Favorite Food:
Bread
Favorite Time of Year:
Fall
Favorite Quote:
You Live, You Learn, And You Pass It On.

Favorite Color:
Winter White
Favorite Food:
Bread
Favorite Time of Year:
Fall
Favorite Quote:
You Live, You Learn, And You Pass It On.

See how Shirley James is related to other HistoryMakers

Shirley James was born in Georgetown, South Carolina on September 5, 1946. Her mother, Camille Barber, was a schoolteacher and her father, Eli Baxter Barber, was a mail porter. In 1964, James graduated from Howard High School. She continued her education at Spelman College in Atlanta, Georgia, where she received her B.A. degree in psychology in 1968. She went on to receive her M.A. degree in education from Harvard University in 1970.

James also became a publisher and editor for The Tribune, a weekly newspaper founded by James’ husband, Robert Earl James, that focuses on the issues of African Americans.

In 2002, James left her position at Savannah State University to become the Coordinator of the Savannah Black Heritage Festival. Between 2004 and 2005, she served on the Board of Directors of the Savannah Area Convention and Visitors Bureau, and in 2005, she was appointed to a five year term for Savannah’s Airport Commission. James is a member of several professional organizations as well as owner of the Education Testing Services in Savannah.

James and her husband Robert live in Savannah, Georgia. They have three adult children.

James was interviewed by The HistoryMakers on January 17, 2007.

See how Shirley James is related to other HistoryMakers
Click Here To Explore The Archive Today!