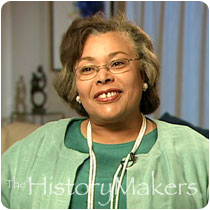 See how Shirley Hughes is related to other HistoryMakers
Donate Now

A corporate executive, compensation specialist and technology expert, Shirley J. Hughes is Senior V.P. of Human Resources at Minneapolis-based Ceridian Corp. of Minneapolis, a $1.2 billion information services company serving human resources and transportation markets. Born on December 6, 1945 in Minneapolis, Hughes was one of four children. Her father, a skycap at what became Northwest Airlines also worked as a professional golfer. Her sister, Joyce Hughes, is a law professor at Northwestern University School of Law.

Hughes graduated from Coe College in Cedar Rapids, Iowa with a B.A. in Political Science in 1966. She began her corporate career in 1967 as a compensation administrator and systems integrator at Control Data. Leaving in 1989 as V.P. of Human Resources, she spent a year at Seagate Technology. She returned in 1991 to the company that had now been reformed as Ceridian Corp., as V.P. of Human Resources and Information Services. She then headed up Trinity Health (formerly Mercy Health Services) in Bloomington Hills, Michigan, a $2.3 billion integrated health care provider, returning to Ceridian in 1998.

Civic-minded and dedicated to the idea of giving back to the community, Hughes is active in many civic and business organizations. She is on the National Association of Manufacturers' Board of Directors and sits on the boards of Big Brothers/Big Sisters of Greater Twin Cities, Blue Cross/Blue Shield of Minnesota and Minneapolis Downtown Council. She is a member of the Minnesota Women's Economic Roundtable. Hughes also has been a member of the Drifters, an African American women's civic organization and the Minneapolis Urban League.

See how Shirley Hughes is related to other HistoryMakers
Donate Now
Click Here To Explore The Archive Today!