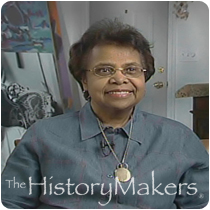 Painter and arts administrator Shirley Woodson Reid was born on March 3, 1936 in Pulaski, Tennessee. Her father, Claude Elwood Woodson, worked for contractor Abraham McKissack, a relative of Reid’s mother, Celia Trotter Woodson. Attending Columbia Elementary School and Sherrill Elementary School, Reid captained the cheerleaders and graduated from Chadsey High School in 1954. She earned her B.F.A. degree from Wayne State University in 1958 and her M.A. degree from the same university in 1966. While attending MacDowell Artist Colony on a fellowship, Reid met her husband, Edsel B. Reid. In 1970, Reid attended the Conference on the Functional Aspects of Black Art (CONFABA) at Northwestern University.

Reid worked as an art education specialist in the Highland Park (Michigan) School District from 1966 to 1992. An art education professor at Wayne State University from 1996 to 2000, Reid started serving as art education supervisor for the Detroit Public Schools in 1992. She also served as director of the Pyramid Art Gallery from 1979 to 1980. Sought after as an art historian, Reid has been interviewed by the Detroit media many times since 1972 and has contributed to scores of newspaper and magazine articles.

Since 1974, Reid has been a member of the national executive board of the National Conference of Artists and in 1997 she was elected president of the Michigan chapter. A board member of the Ellington White Project, Reid is also a member of the Detroit Art Teachers Association, College Art Association, National Art Education Association and the Michigan Art Education Association. Reid’s paintings of African American life are a part of 22 collections housed by the Detroit Institute of Arts, the Studio Museum of Harlem, the Museum of the National Center for Afro American Artists (Boston), Detroit Edison, the Toledo Art Commission, Florida A&M University and Seagrams. She has two sons, Khari and Senghor Reid.

See how Shirley Ann Woodson Reid is related to other HistoryMakers
Donate Now
Click Here To Explore The Archive Today!