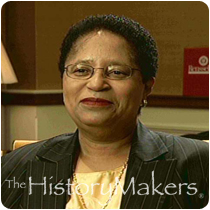 Favorite Color:
Red
Favorite Time of Year:
Fall
Favorite Vacation Spot:
Anywhere
Favorite Quote:
Aim For The Stars, So That At Least You Can Reach The Treetops.

Favorite Color:
Red
Favorite Time of Year:
Fall
Favorite Vacation Spot:
Anywhere
Favorite Quote:
Aim For The Stars, So That At Least You Can Reach The Treetops.

See how Shirley Ann Jackson is related to other HistoryMakers

Renowned physicist and university president Shirley Ann Jackson was born on August 5, 1946, in Washington, D.C., to George Hiter Jackson and Beatrice Cosby Jackson. When Jackson was a child, her mother would read her the biography of Benjamin Banneker, an African American scientist and mathematician who helped build Washington, D.C., and her father encouraged her interest in science by assisting her with projects for school. The Space Race of the late-1950s would also have an impact on Jackson as a child, spurring her interest in scientific investigation.

Jackson attended Roosevelt High School in Washington, D.C., where she took accelerated math and science classes. Jackson graduated as valedictorian in 1964 and encouraged by the assistant principal for boys at her high school, she applied to the Massachusetts Institute of Technology (MIT). Jackson was among the first African American students to attend MIT, and in her undergraduate class she was one of only two women.

In 1973, Jackson graduated from MIT with her Ph.D. degree in theoretical elementary particle physics, the first woman to receive a Ph.D. in physics in MIT’s history. Jackson worked on her thesis, entitled The Study of a Multiperipheral Model with Continued Cross-Channel Unitarity, under the direction of James Young, the first African American tenured full professor in the physics department at MIT. In 1975, the thesis was published in Annals of Physics.

After receiving her degree, Jackson was hired as a research associate in theoretical physics at the Fermi National Accelerator Laboratory, or Fermilab. While at Fermilab, Jackson studied medium to large subatomic particles, specifically hadrons, a subatomic particle with a strong nuclear force. Throughout the 1970s, Jackson would work in this area on Landau theories of charge density waves in one- and two-dimensions, as well as Tang-Mills gauge theories and neutrino reactions.

In 1974, after two years with the Fermilab, Jackson served as visiting science associate at the European Organization for Nuclear Research in Switzerland, and worked on theories of strongly interacting elementary particles. In 1975, Jackson returned to Fermilab, and was simultaneously elected to the MIT Corporation’s Board of Trustees. In 1976, Jackson began working on the technical staff for Bell Telephone laboratories in theoretical physics. Her research focused on the electronic properties of ceramic materials in hopes that they could act as superconductors of electric currents. While at Bell laboratories, Jackson met her future husband, physicist Morris A. Washington. That same year, she was appointed professor of physics at Rutgers University. In 1980, Jackson became the president of the National Society of Black Physicists and in 1985, she began serving as a member of the New Jersey Commission on Science and Technology.

In 1991, Jackson served as a professor at Rutgers while working for AT&T Bell Laboratories in Murray Hill, New Jersey. In 1995, Jackson was appointed by President Clinton to the chair of the Nuclear Regulatory Commission. In 1997, Jackson led the formation of the International Nuclear Regulators Association. In 1998, Jackson was inducted into the National Women’s Hall of Fame; the following year, she became the eighteenth president of Rensselaer Polytechnic Institute. Jackson remains an advocate for women and minorities in the sciences and, since 2001, has brought needed attention to the "Quiet Crisis" of America’s predicted inability to innovate in the face of a looming scientific workforce shortage.

Shirley Ann Jackson was interviewed by The HistoryMakers on September 22, 2006 .

See how Shirley Ann Jackson is related to other HistoryMakers
Click Here To Explore The Archive Today!