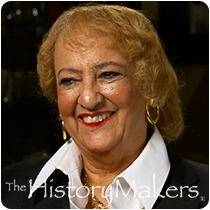 See how Shirlee Haizlip is related to other HistoryMakers
Donate Now

Author Shirlee Taylor Haizlip was born on September 3, 1937 in Stratford, Connecticut. She was one of four children raised by Reverend Julian Augustus Taylor and Margaret Morris Taylor. Haizlip grew up in Ansonia, Connecticut and graduated from Wellesley College with her B.A. degree in 1959. Haizlip then received her M.A. degree in urban planning from Harvard University’s School of Urban Design in 1966.

In 1975, Haizlip joined WBNB-TV, a CBS-TV affiliate on the island of St. Thomas in the U.S. Virgin Islands where she became the first African American to serve as general manager of a CBS-TV affiliate. From 1981 until 1986, Haizlip served as director of corporate communications for WNET-TV in New York City. In 1989, she was appointed executive director of the National Center for Film and Video Preservation in Los Angeles, California.

Haizlip has authored several books. In The Sweeter the Juice: A Family Memoir in Black and White (1994), Haizlip chronicles her family history. Along with her husband, Dr. Harold C. Haizlip, she co-authored In The Garden of Our Dreams: Memoirs of a Marriage (1998). Haizlip also authored Finding Grace: Two Sisters and the Search for Meaning Beyond the Color Line (2004). In addition, she published book reviews in The San Francisco Chronicle; editorial articles in The New York Times and The Los Angeles Times; and essays in magazines such as American Legacy and American Visions. Haizlip appeared on many television and radio shows including “The Oprah Winfrey Show,” “Larry King Live,” “Front Page,” “Dateline News,” National Public Radio and “20/20 News.”

Haizlip served as a member of the board of directors for P.E.N. West and Women in Film. Her memoir, The Sweeter The Juice, has won many awards including The Simon Wiesenthal Award and The New York Time’s “Notable Book of the Year” award. The University of New Haven awarded Haizlip an Honorary Doctorate of Humane Letters Degree. When Wellesley College celebrated its 125th anniversary, Haizlip was honored as an “Outstanding Alumna” along with former U.S. Secretary of States Hillary Rodham Clinton and Madeline K. Albright.

Shirlee Taylor Haizlip was interviewed by The HistoryMakers on November 16, 2013.

See how Shirlee Haizlip is related to other HistoryMakers
Donate Now
Click Here To Explore The Archive Today!