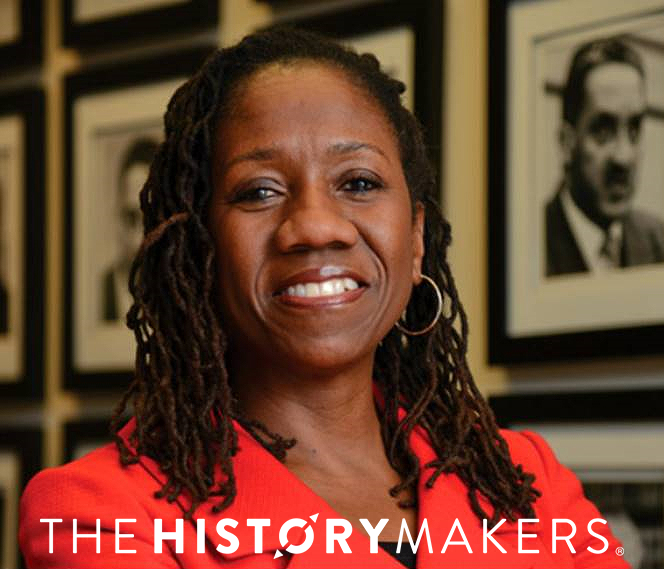 See how Sherrilyn Ifill is related to other HistoryMakers

Nonprofit director and law professor Sherrilyn Ifill was born on December 17, 1962 in New York, New York. Ifill graduated from Vassar College in 1984 with her B.A. degree in English, and went on to receive her J.D. degree from New York University School of Law in 1987.

From 1987 to 1988, Ifill served as a senior fellow with New York’s American Civil Liberties Union office. She then worked as assistant counsel for the NAACP Legal Defense and Education Fund from 1988 to 1993. While there, Ifill litigated the landmark case of Houston Lawyers’ Association v. Attorney General of Texas in 1991 which declared that the second article of the Voting Rights Act covered judicial elections. In 1993, Ifill accepted a faculty position as professor of law at the University of Maryland Francis King Carey School of Law, focusing on civil procedure and constitutional law. She also co-founded one of the first legal clinics in the nation dedicated to eliminating the legal barriers placed on recently released criminal offenders looking to re-enter society. Her book On the Courthouse Lawn: Confronting the Legacy of Lynching in the Twenty-first Century was published in 2007. In 2012, Ifill was chosen as President and Director-Counsel for the NAACP Legal Defense and Educational Fund. In this role, she led the litigation proceedings for Shelby County v. Holder in 2013 and Fisher v. University of Texas Austin in 2016.

Ifill is the recipient of numerous awards including the Award for Professional Excellence from Harvard Law School’s Center on the Legal Profession and the M. Shanara Gilbert Human Rights Award from the Society of American Law Teachers. She served as the commencement speaker in 2015 for both Bard University and her alma mater, New York University where she was also awarded honorary doctorate degrees. A frequent guest and contributor on CNN, NBC, ABC, C-Span, National Public Radio, Ifill served on the boards of Equal Justice Works, the National Constitution Center, the Learning Policy Institute, the National Women’s Law Center as well as board chair of U.S. Programs for the Open Society from 2011-2013.

Ifill and her husband have three children.

Sherrilyn Ifill was interviewed by The HistoryMakers on August 29, 2016.

See how Sherrilyn Ifill is related to other HistoryMakers
Click Here To Explore The Archive Today!