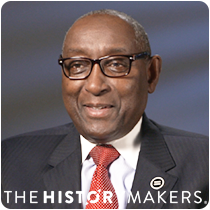 See how Sherman Tate is related to other HistoryMakers
Donate Now

Upon graduation, Tate was hired by the consulting firm, General Behavioral Systems. He then went to work for the Arkansas Office of Personnel Management in 1972 as a personnel analyst. Tate subsequently worked for the Arkansas Bureau of Legislative Research where he was the personnel director of the State Legislative Council, making him their first African American employee. In 1974, Tate was hired by the University of Arkansas, Little Rock to develop and run an office of non-academic personnel. At the request of Governor David Pryor, Tate returned to the Arkansas Office of Personnel Management and became the first African American to manage this department. In 1980, he was named director of personnel for Arkla Gas Company’s Arkansas Division, making him the first African American in a management position at the company. Tate was later promoted to vice president of consumer and community relations, then vice president of marketing; and two years, later he became vice president of distribution and operations. Tate subsequently joined Alltel Corporation in 1998 as vice president and general manager of operations, where he was responsible for human and fiscal resources for Alltel's telephone operations in Arkansas and Mississippi. Tate also served as president of the local telephone company and vice president of external affairs for Alltel until they were acquired by Verizon in 2009. With Verizon, he served as vice president from 2009 to 2011 and was responsible for legislative, regulatory and public policy issues in Arkansas, Louisiana, Tennessee, Kentucky and Ohio. In 2011, Tate left Verizon and established two management consulting firms, the Domino Effect and HT & Associates, now a part of the holding company Tate & Associates.

Tate was also the first African American to be elected chairman of the Little Rock Regional Chamber of Commerce in 1989, and has since served on numerous boards including for Philander Smith College, St. Vincent Health System, the United Negro College Fund, and the Pulaski County Facilities Board. In addition, he serves on the board of the Arkansas Blue Cross and Blue Shield and as chairman of the Southern Bancorp Bank Governing Board and the Urban League of the State of Arkansas.

Sherman Tate was interviewed by The HistoryMakers on March 12, 2018.

See how Sherman Tate is related to other HistoryMakers
Donate Now