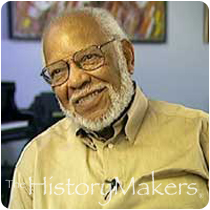 See how Sherman Beverly is related to other HistoryMakers

Professor of history Sherman Beverly, Jr., was born in Port Arthur, Texas, on August 3, 1927. Beverly attended Bishop College in Texas, where he earned his B.A. in history and political science, and then attended the Chicago Teachers College to obtain teacher certification. He would later earn an M.A. from Illinois Teachers College and a Ph.D. in social studies education from Northwestern University.

After earning his bachelor's degree, Beverly began teaching adult education classes in Port Arthur in 1951 and remained there for two years. After relocating to Chicago, he began working for the Chicago Board of Education in 1957, and he would remain there for the next twelve years, with the exception of a single year off to work as an elementary teacher. In 1969, Beverly took a position with Malcolm X College in Chicago as an associate professor of history, as well as a position at Kendall College as an instructor in the African American Studies Department. He remained at Kendall for the next four years before taking a position with Union Graduate School in Cincinnati, Ohio, as a part-time consulting faculty member and a full-time position with Northeastern Illinois University in Chicago. Beverly remained at Northeastern until his retirement in 1992, teaching education courses in inner-city studies social studies. Today, he is the senior consultant and owner of Making Schools Educational, Inc.

Beverly is a prolific reader, and serves on the board of the Caxton Club, a group of book collectors. He directed the Sigma Pi Phi fraternity Men of the Future program for five years, where he met with young men from the Chicago area to encourage them to develop into well-rounded citizens. He is a founder of the Bluestem Festival of Arts and Humanities and a board member of the Society for Values in Higher Education. He has written numerous articles and continues to be involved in speaking engagements on diverse topics. Beverly and his wife, Eve, live near Chicago. They have three children.

See how Sherman Beverly is related to other HistoryMakers
Click Here To Explore The Archive Today!