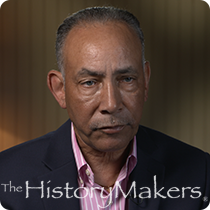 See how Shelley Stewart, Jr. is related to other HistoryMakers
Donate Now

Corporate executive Shelley Stewart, Jr. was born on April 16, 1953 in Glen Cove, New York to Shelley Stewart, Sr. and Verna Stewart. He received his B.S. and M.S. degrees in criminal justice from Northeastern University in Boston, Massachusetts in 1975 and 1978, respectively, and his M.B.A. degree in business administration from the University of New Haven in West Haven, Connecticut in 1990.

In 1982, Stewart joined United Technologies Corporation (UTC) and served as director of worldwide sourcing and in a variety of leadership and operations positions at United’s subsidiaries, Norden Systems, Inc. and Hamilton Sunstrand. Stewart remained with United Technologies Corporation until 2000, when he became vice president of supply chains at the Raytheon Company. He joined Invensys in 2002 as the company’s senior vice president of supply chain, headquartered in London, England. Then, in 2003, Stewart became the chief procurement officer and senior vice president of operational excellence at Tyco Industries. He also served as vice president of Tyco’s supply chain management from 2003 until 2006. Stewart remained in leadership positions at Tyco Industries until 2012, when he joined E.I. du Pont de Nemours and Company (DuPont) as the chief procurement officer and vice president of sourcing and logistics. In 2016, he assumed the responsibility for facilities services and real estate

Stewart co-authored Straight To The Bottom Line: An Executive’s Roadmap to World Class Supply Management, which was published in 2005.

In addition to his business career, Stewart served on the board of directors of Cleco Corporation, and as board chair of the Howard University’s School of Business, as vice chair of the National Minority Supplier Development Council, as president of the board for The Boys and Girls Club of Trenton/Mercer County. He also was appointed to the U.S. Department of Commerce’s National Advisory Council on Minority Business Enterprise. Stewart served on the Board of Trustees of Northeastern University Corporation, and as a member of The Conference Board's Purchasing and Supply Leadership Council.

Stewart and his wife, Ann C. Stewart, have one child, Shelley Stewart III.

Shelley Stewart, Jr. was interviewed by The HistoryMakers on August 17, 2017.

See how Shelley Stewart, Jr. is related to other HistoryMakers
Donate Now