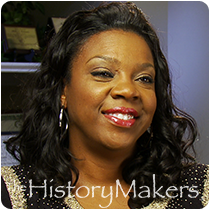 See how Sheila Robinson is related to other HistoryMakers

Marketing chief executive and publisher Sheila A. Robinson was born on September 20, 1961 in Winston-Salem, North Carolina. She graduated from Parkland Senior High School in Winston-Salem in 1979, and went on to receive her B.A. degree in pre-law/political science from North Carolina Central University in Durham, North Carolina in 1986. Robinson later received her Masters of Entrepreneurship (M.S.E.) degree from Western Carolina University in 2011, as well as a Chief Learning Officer Certificate from the University of Pennsylvania in 2013. In 2012, she entered the Chief Learning Officer Ed.D. program at the University of Pennsylvania. She has also completed Stanford University’s Professional Publishing Program.

From 1987 to 1989, Robinson worked for R.J. Reynolds Tobacco Company as a market research assistant. In 1990, she was hired by DuPont, where she went on to serve as a marketing director with the company’s apparel division. When her division at DuPont was sold in 2004, Robinson established Robinson & Associates Communications, LLC and became founder and publisher of North Carolina Career Network magazine. In 2007, Robinson expanded Career Network nationally and launched Diversity Woman magazine, where she served as chief executive officer and publisher. Robinson also hosted the Diversity Women's Business Conference and founded Iamaleader.org, the nonprofit extension of Diversity Woman in 2012.

In 2009, Robinson was honored with a Mid-Eastern Athletic Conference Image Award for her career achievements and for being a positive role model for young women. She was named in 2009 as one of the Top 50 Women in Magazine Publishing by Publishing Executive. Robinson was also the keynote speaker at the 2008 wives luncheon at the NFL Pro Bowl, and was honored as the Greensboro Chamber of Commerce Minority Business Person of the Year in 2011. Her Diversity Woman magazine was nominated for The 2011 North Carolina Small Business of The Year.

Robinson is a member of the National Association for Female Executives and the National Association for Women Business Owners, and serves on the boards of Women in Periodical Publishing and Business and Professional Women. She is the author of Lead By Example: An Insiders Look at How to Successfully Lead in Corporate America and Entrepreneurship, which was published in 2014.

Sheila Robinson was interviewed by The HistoryMakers on August 15, 2014.

See how Sheila Robinson is related to other HistoryMakers
Click Here To Explore The Archive Today!