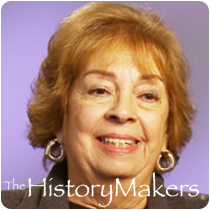 Writer, producer and consultant Sheila Gregory Thomas was born on November 11, 1938 in Atlantic City, New Jersey. Her mother was Hugh Ella Hancock-Gregory, and her father was Thomas Montgomery Gregory, a well-known educator and dramatist. Thomas graduated from Howard University with her B.A. degree in Spanish in 1961.

Upon graduation, Thomas was hired as a Spanish teacher in the Washington D.C. public school system, where she taught until 1969. Thomas then created, produced and began hosting the educational children’s television program The Magic Door on WMAL-TV in Washington D.C. The show aired from 1969 until 1973. In 1974, while working as an independent writer and consultant, she was engaged as media coordinator for the vice chairman of the D.C. city council. In 1976, Thomas was hired as a public affairs specialist for the National Park Service. She then accepted the position of cultural education specialist in 1977, remaining in that position until 1979, when she worked as an independent writer and consultant. In 1988, Thomas was appointed director of public relations for Diversified Engineering and Architecture. Then, in 1996, she was featured on PBS’s Frontline, in her interview of producer and writer, June Cross. That same year, Thomas began serving as vice president of Diversified Environmental, Inc.

Thomas has published a number of articles relating to her family’s history. In 1984, she wrote an article about her great-grandmother entitled “Margaret Mahammitt of Maryland,” which was published by the Association for the Study of Afro-American Life and History. Thomas also authored an article in 2002 about her father, Thomas Montgomery Gregory. In 2008, three family biographies she wrote for the African American National Biography project were published by Oxford University Press. Thomas has received the MAMM Award from the American Association of University Women, the Action for Children’s Television Award, the Capital Press Club Award, and the Ohio State Award.

Sheila Gregory Thomas was interviewed by The HistoryMakers on October 25, 2013.

See how Sheila Gregory Thomas is related to other HistoryMakers
Donate Now
Click Here To Explore The Archive Today!