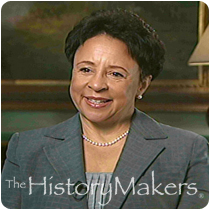 See how Sheila C. Johnson is related to other HistoryMakers
Donate Now

Entrepreneur Sheila Crump Johnson was born on January 25, 1949, in Pennsylvania. Her father, George P. Crump, was a prominent neurosurgeon, and her mother, Marie Iris Crump, was an accountant. During her early years, her father’s practice at Veterans Administration hospitals took the family from town to town. Johnson’s family then relocated to Maywood, Illinois, a suburb of Chicago, where she attended Irving High School, and then graduated from Proviso High School in 1966. During this time, Johnson found her first love, music; she went on to become a concert violinist and the first African American to win a statewide violin competition in Illinois. After high school, Johnson enrolled in the University of Illinois where she met her now-former husband and business partner, Robert Johnson (divorced 2002).

In 1969, Johnson married Robert Johnson, and in 1970, graduated from the University of Illinois with her B.A. degree in music. After graduation, Johnson worked as a music teacher at the private school, Sidwell Friends. In 1975, she founded a 140-member youth orchestra, Young Strings in Action. The group was invited to perform in the Middle Eastern nation of Jordan, where she was given the country’s top educational award by Jordan’s King Hussein.

In 1980, Johnson and her husband co-founded Black Entertainment Television (BET), a cable network geared towards African American audiences. Johnson became BET’s executive vice president for corporate affairs, focusing on issues affecting the communities that BET served. In 1989, Johnson created Teen Summit, a show that dealt with the everyday issues of teens and attempted to motivate the teen viewers.

In 1999, Johnson left BET to pursue her own interests and to guide her daughter’s equestrian career. In 2002, Johnson became head of the Washington International Horse Show. Johnson purchased a farm in Northern Virginia in Middleburg and turned the 350 acre estate into the Salamander Inn & Spa, an 85,000-square-foot French country resort. Johnson also formed Salamander Hospitality, a hotel resort and spa management firm, in order to achieve those goals.

Johnson became involved in the Washington Mystics WNBA franchise, and in 2005 purchased it from former owner, Abe Pollin; this and similar moves in relation to the Washington Capitals (NHL) and the Washington Wizards (NBA), earned her the distinction of being the first woman to be a stakeholder in three professional sports franchises. In 2005, Johnson married William T. Newman, Jr., a judge in Arlington, Virginia. In July of 2007, Johnson purchased Innisbrook Golf Resort and its four golf courses outside of Tampa, Florida. Johnson expanded her portfolio to include film in 2008, when she was the executive producer of A Powerful Noise. Johnson is the mother of two children, Paige Johnson and Brett Johnson.

See how Sheila C. Johnson is related to other HistoryMakers
Donate Now
Click Here To Explore The Archive Today!