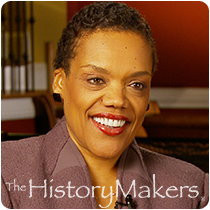 Favorite Color:
Yellow Orange
Favorite Food:
Chocolate
Favorite Time of Year:
Every Time the Seasons Change
Favorite Vacation Spot:
Cancun, Mexico
Favorite Quote:
Know Why You Are Where You Are.

Favorite Color:
Yellow Orange
Favorite Food:
Chocolate
Favorite Time of Year:
Every Time the Seasons Change
Favorite Vacation Spot:
Cancun, Mexico
Favorite Quote:
Know Why You Are Where You Are.

See how Sharon Hall is related to other HistoryMakers
Donate Now

In 1978, Hall was hired as assistant brand manager at Procter & Gamble. In 1982, she began working as a consultant at Booz Allen Hamilton. She was hired as manager of strategic planning for Pacific markets at Avon in 1984, and by 1992, she worked her way up to being general manager of the Avon’s new business development group. In 1997, Hall was hired at the executive search firm Spencer Stuart, where she became partner in 2001. She is a member of the firm’s human resources and consumer practice specialties. She founded the firm’s Diversity Practice in 1999, and began serving as a global diversity practice leader. Hall became the only African American to ever serve on the board of Spencer Stuart in 2005, and managed the firm’s Atlanta office for five years.

Hall has been widely recognized for her success in business. In 1987, Hall was named an Outstanding International Business Woman by Dollars & Sense Magazine. She was recognized by Avon with its Chairman’s Award in 1990 and 1992. She participated in the 1992 marketing strategy development for the Boys & Girls Clubs of America; and became a board director at the Kansas City Urban League in 1994. Spencer Stuart awarded Hall the Q-Firm Award in 2000. In 2006, she was awarded by Women Worth Watching; and in 2008, she was included on The Essence Power List. Hall was a featured speaker at the 2010 Women on Wall Street Conference, and is a speaker at the 2014 Black Enterprise Women of Power Summit.

Hall has been interviewed or featured in the publications Fortune Magazine, Dollars & Sense Magazine, Business to Business, The Atlanta Journal-Constitution, and Black Enterprise.

Hall lives in Atlanta, Georgia and has two children, Christopher and Casey.

Sharon Hall was interviewed by The History Makers on February 18, 2014.

See how Sharon Hall is related to other HistoryMakers
Donate Now
Click Here To Explore The Archive Today!