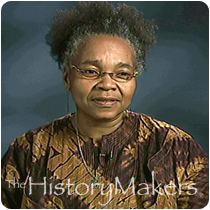 See how Sharon Farmer is related to other HistoryMakers
Donate Now

Former Director of White House photography Sharon Camille Farmer was born on June 10, 1951, in Washington, D.C. Farmer attended Ohio State University where she was a member of Delta Sigma Theta Sorority, Inc., and served as vice president of the student government. As a student, Farmer also served as editor for the school newspaper, Our Choking Times, and protested school policies that interfered with black and white student relations.

In 1974, after graduating with her B.S. degree from Ohio State University, Farmer began a career as a freelance photographer. She went on to work for the Smithsonian Institution, the Washington Post and the American Association for the Advancement of Science, shooting news stories, political campaigns, cultural events, conferences, and portraits. Farmer also lectured extensively on photography and served on the faculty for American University, Mount Vernon College, and Indiana University.

In 1993, Farmer was hired as a White House photographer and began traveling the world taking pictures of President Bill Clinton and the first lady, Hillary Rodham Clinton. Among the many famous images she captured were the handshake between the late Prime Minister Yitzhak Rabin and Yasser Arafat; and President and Mrs. Clinton witnessing the launch of the space shuttle Discovery with astronaut John Glenn. Then, in 1999, Farmer was promoted to Director of White House Photography and became the first African American and first woman to hold this position. Later, in 2004, she was the campaign photographer for Senator John Kerry’s presidential election campaign.

Farmer has presented many exhibits at museums and cultural institutions nationwide, including: Art against AIDS, Gospel in the Projects, Twenty Years on the Mall, Washington, D.C. - Beijing Exchange, and Our Views of Struggle.

See how Sharon Farmer is related to other HistoryMakers
Donate Now
Click Here To Explore The Archive Today!