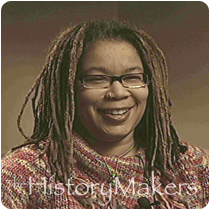 See how Shari Carpenter is related to other HistoryMakers
Donate Now

Filmmaker Shari Carpenter was born on July 14, 1961 in Washington, D.C. She is one of the first African American script supervisors to join the film union Local 161. Her mother, Vivian Carpenter, was a homemaker and her father, Horace Carpenter, was an aspiring artist. As a child, Carpenter was a natural storyteller and wrote several short stories. The 1970s blaxploitation era films also inspired her. She received her diploma from McKinley High School in 1979 and her B.F.A. degree from New York University in 1984.

Carpenter’s career began in 1990 when she became the script supervisor on Spike Lee’s Jungle Fever. She has worked on most of his films since then including Malcolm X in 1992 and Inside Man in 2005. As a filmmaker she has written and directed several short films including The Assistant and Since Lisa, which won several awards including Black Filmmakers Hall of Fame and the Black American Cinema Society Awards. Her films were selected to appear on BET Jazz’s The Best Shorts. Carpenter’s debut feature film, Kali’s Vibe, won the Jury Award and the Audience Award for Best Feature in 2002 at the Denver Pan African Film Festival. It was also nominated for the first annual Gordon Parks Award and won the Martha’s Flavor Fest Screenplay Competition.

Carpenter has received grants from the Eastman Fund as well as the New York State Council for the Arts. She has appeared as a panelist on the Black Filmmakers in the Director’s Chair Africana.com Roundtable. She also teaches several seminars on directing actors, screenwriting and script supervision. In 2004, she won the Oregon Writers Colony fiction award for her short story, Ashes. Carpenter currently resides in Brooklyn, New York.

Shari Carpenter was interviewed by The HistoryMakers on January 31, 2007.

See how Shari Carpenter is related to other HistoryMakers
Donate Now
Click Here To Explore The Archive Today!