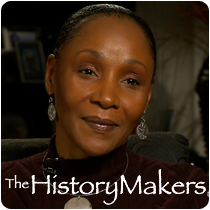 See how Sgt. Maj. Michele Jones is related to other HistoryMakers

Army Noncommissioned Officer Michele S. Jones was born on November 24, 1963 in Baltimore, Maryland. She spent her childhood in the the Baltimore area, and graduated from Milford Mill High School. Upon graduation, Jones enrolled at Howard University but then transferred to Fayetteville State University, where she received her B.S. degree in business administration in 1994.

Jones enlisted in the United States Army in September 1982, and later became the first female selected class president of the United States Army Sergeants Major Academy. Throughout her military career, Jones has served in many positions of leadership, including squad leader, section leader, platoon sergeant and first sergeant. Additionally, she was involved in every major contingency operation involving U.S. Armed Forces: Operations Desert Shield/Storm, Restore Hope, Provide Comfort, Joint Endeavor, Nobel Eagle, Operation Iraqi Freedom and Operation Enduring Freedom. In 2002, Jones became the first female appointed as the 9th Command Sergeant Major of the U.S. Army Reserve. In 2007, she retired after twenty-five years of service in both the active and reserve component.

Upon retirement, Jones continued to serve the youth and elderly as a motivational speaker for the civilian community. Through the Army’s Planning For life Program, Jones has given lectures and speeches to over forty-five thousand middle and high school students in the U.S. and abroad. In 2009, she was appointed under the administration of President Barack Obama as special assistant to the Secretary of Defense White House Liaison. Jones has also held positions as the special assistant and senior advisor to the Under Secretary of Defense, the principal deputy to the Under Secretary of Defense, and as the director of External Veterans/Military Affairs and Community Outreach.

Jones is the recipient of several military awards, including the Legion of Merit, the Meritorious Service Medal, the Army Parachutist Badge, the German Army Forces Airborne Wings and the Royal Thai Airborne Wings. In 2005, she received the Meritorious Service Award from the National Association for the Advancement of Colored People. In 2009, she received the Spirit of Democracy Lifetime Achievement Award from the National Coalition on Black Civic Participation as well as the Freedom’s Sister Award from the Ford Foundation. The National Congress of Black Women honored Jones in 2011 with the Shirley Chisholm Trailblazer Award.

Michele S. Jones was interviewed by The HistoryMakers on January 14, 2013.

See how Sgt. Maj. Michele Jones is related to other HistoryMakers
Click Here To Explore The Archive Today!