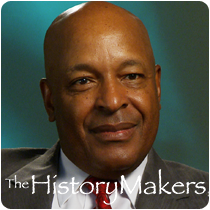 See how Sgt. Maj. Alford McMichael is related to other HistoryMakers

In 1973, McMichael was assigned to the 2nd Battalion, 5th Marines at Camp Pendleton. He returned to the Marine Corps Recruit Depot in San Diego in December of 1973 where he served as a drill instructor, a series gunnery sergeant, and a battalion drill master. After completing Marine Security Guard School in 1979, McMichael was assigned to the American Embassy in Copenhagen, Denmark. In December of 1984, he transferred to Okinawa, Japan to serve as the First Sergeant of Company C, 3rd Reconnaissance Battalion. McMichael was appointed deputy director of the Staff Noncommissioned Officers Academy at the Marine Corps Air Station in El Toro, California in 1988 and served there as director from 1989 to 1991.

U.S. Marine Corps Sargent Major Alford L. McMichael was interviewed by The HistoryMakers on May 22, 2013.

See how Sgt. Maj. Alford McMichael is related to other HistoryMakers
Click Here To Explore The Archive Today!