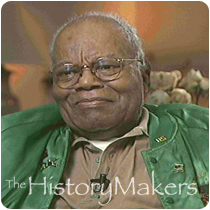 See how Sgt. Johnny Holmes is related to other HistoryMakers

Joining the United States Army in 1939, Holmes experienced intense racism for the first time. After the onset of World War II, Holmes was chosen to become a part of the all black 761st Tank Battalion. Like the Tuskegee Airmen, this unit was intended by American reformers to be a step towards integrating the United States armed forces. Training in Custer, Michigan, Fort Knox Kentucky, Camp Claiborne, Louisiana and finally at Fort Hood, Texas, Holmes learned all the nuances of the M4 tank. Beginning in November of 1944, the 761st Tank Battalion under General Patton’s command engaged the enemy for 183 straight days, spearheading many of Patton’s offensives at the Battle of the Bulge and in six European countries. “Patton’s Panthers” lived up to their motto, “Come Out Fighting” defeating 6,000 enemy soldiers, capturing thirty towns and in 1945 liberating Jewish prisoners from concentration camps at Dachau, Lambach and Buchenwald.

In 1946, Holmes returned to private life, working for the City of Chicago. He retired from the Doehler Corporation, married twice and became involved in real estate.

Johnny Holmes was interviewed by The HistoryMakers on December 12, 2006.

See how Sgt. Johnny Holmes is related to other HistoryMakers
Click Here To Explore The Archive Today!