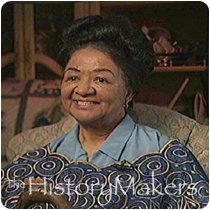 Favorite Color:
Blue
Favorite Food:
Meat, Fish, Vegetables, Fruits
Favorite Time of Year:
Spring, Summer
Favorite Vacation Spot:
Hawaii, Africa
Favorite Quote:
Do unto others as you would have them do unto you.

Favorite Color:
Blue
Favorite Food:
Meat, Fish, Vegetables, Fruits
Favorite Time of Year:
Spring, Summer
Favorite Vacation Spot:
Hawaii, Africa
Favorite Quote:
Do unto others as you would have them do unto you.

See how Serena Strother Wilson is related to other HistoryMakers

African American griot, master-quilter, educator and entrepreneur Serena Strother Wilson was born in Edgefield, South Carolina, in March 18, 1934. Wilson grew up in Philadelphia, Pennsylvania, and Williamson, West Virginia. Wilson attended West Virginia State College from 1952 to 1955 and earned her B.S. degree in elementary education from Bluefield State College in 1968. She went on to earn her M.A. degree in psychology and guidance in 1973. Wilson taught at the elementary, middle, and high school levels in Columbus, Ohio, and in Heidelberg and Berlin, Germany. Wilson also tutored special education students in Oklahoma, Virginia, and in Germany. She retired from the Columbus Board of Education as a consultant and teacher supervisor with the Department of Special Education in 2000.

As a child, Wilson learned the basics of quilting, a family specialty. She also learned about the “code” hidden in the patterns of the quilt blocks that had been handed down to five generations of her family from Wilson’s great grandmother, Eliza Farrrow, to her grandmother, Nora Bell McDaniel, to her mother, Mary Eva McDaniel and her aunts Ozella and Katherine, and then to her. She passed the knowledge on to her daughters Teresa Wilson Kemp and Maria Denese Wilson and to her grandchildren. After mastering the art of quilting, she made these works of fiber art available to people in South Carolina, Ohio and communities across the country. Wilson and her daughter, Teresa Kemp, founded and run the McDaniel Secret Quilt Code Museum Exhibit, a program designed to increase public awareness of quilting and its place in African American history. The history of the family’s quilting traditions is the subject of Hidden in Plain View: A Secret Story of Quilts and the Underground Railroad, a book by Jacqueline L. Tobin and Dr. Raymond G. Dobard.

See how Serena Strother Wilson is related to other HistoryMakers
Click Here To Explore The Archive Today!