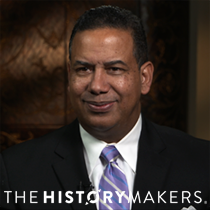 See how Scott Syphax is related to other HistoryMakers

Business executive Scott Syphax was born on July 13, 1963 in Detroit, Michigan to Vernettia Gilmore Syphax and Charles Syphax. Raised in Sacramento, California, Syphax graduated from John F. Kennedy High School in 1981, and became the manager of The Vortex, a nightclub in downtown Sacramento. After working as an executive fellow with the public policy and leadership training program at the Coro Foundation, Syphax then earned his B.S. degree in business administration, real estate development, and land use planning from California State University, Sacramento in 1992.

From 1992 to 1994, Syphax worked as a senior policy consultant for California State Senator Robert Presley. He then served as chief executive officer of the California State Board of Behavioral Sciences for one year, before accepting a position as senior lobbyist for the California Medical Association. From 1999 to 2001, Syphax worked as the manager of public affairs for the pharmaceutical company, Eli Lilly and Company; and then in 2001, Syphax became the president and chief executive officer of the Nehemiah Corporation of America, a real estate and community development company. In 2009, Syphax founded the Nehemiah Emerging Leaders Program; and the following year, he launched the Neighborhood Restoration Program and the Roofs for Troops program. He was also a developer for the Township Nine project, a sixty-five acre mixed-use development project in Sacramento’s River District. In 2011, Syphax became the producer and host of the PBS KVIE public television show Studio Sacramento, which won an Emmy Award in 2013 for an episode on human trafficking. After leaving the Nehemiah Corporation of America in 2017, Syphax founded Syphax Strategic Solution.

Syphax received numerous awards for his professional accomplishments, including the 2011 Exemplary Leader Award from the American Leadership Forum, the Economic Trailblazer Award from the Sacramento Black Chamber of Commerce, the Al Geiger Award from the Sacramento Metropolitan Chamber of Commerce and the Excellence in Broadcasting Award from the American Council on Arab Islamic Relations, all in 2013. Syphax was also the recipient of the Urban League’s 2016 Community Empowerment Award and the Congressman Robert T. Matsui Community Service Award from The Dr. Martin Luther King Jr. Celebration Committee in 2017. Syphax served on the board of Sutter Health San Sierra, Homeaid America, the California Medical Association Foundation, Valley Vision, and the Bay Area Council. Syphax was also a member of the California Department Insurance Task Force on Board Governance and Supplier Diversity.

Scott Syphax was interviewed by The HistoryMakers on April 3, 2018.

See how Scott Syphax is related to other HistoryMakers