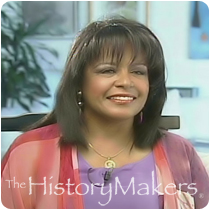 See how Scherrie Payne is related to other HistoryMakers

Singer and songwriter Scherrie Payne was born November 4, 1944, in Detroit, Michigan, to Frederick and Charcle Lee Payne. The younger sister of Freda Payne, Scherrie learned to sing and play the piano at an early age. Payne attended Crossman Elementary School, Hutchins Middle School, and graduated from Central High School in 1961. Payne earned her B.S. degree from Michigan State University in 1966.

Teaching at Grayling School of Observation, Payne was discovered by Eddie Holland of the Motown team of Holland, Dozier and Holland. In 1968, Payne and her sister Freda, already an established performer, signed contracts with Holland, Dozier and Holland’s new label, Invictus. Payne joined The Glass House, which consisted of herself, Pearl Jones, Larry Mitchell and Ty Hunter. Payne sang lead and contributed to the writing of “Hotel”, “The Fox”, “Horse and Rider”, “Heaven Is There To Guide Us”, “Let It Flow” and “Crumbs Off The Table,” the group’s biggest hit record. When The Glass House disbanded, Payne toured briefly with Charo’s Review before Lamont Dozier introduced her to Mary Wilson; Wilson then invited Payne to join the Supremes. Payne joined Wilson and Cindy Birdsong in the fall of 1973 and became known as “the little lady with the big voice” singing most of the leads. Payne was officially the last lead singer for the Supremes in 1977, when the group consisted of her, Susaye Greene, and Mary Wilson. The final Supremes album Mary, Scherrie & Susaye was released in late 1976; it boasted several club smashes, including "Let Yourself Go," "You're My Driving Wheel," "Love I Never Knew You Could Feel So Good," "I Don't Want To Be Tied Down,” and “I’m Gonna Let My Heart Do The Walking”, which was their biggest hit. On June 12, 1977, in London, England, The Supremes performed their final performance. After the break up, Payne and Greene recorded 1979's Partners which focused on the writing and singing talents of both artists.

In 1982, Payne released her first solo hit, "I'm Not In Love.” The Altair Records recording featured Payne’s sister Freda, Mary Wilson, and Edmund Sylvers singing background. This success led to the recording of Payne’s 1984 single, "One Night Only" (from Dreamgirls) for Megatone Records. In 1986, Payne and the late Ronnie Phillips formed Former Ladies of the Supremes (FLOS), which at various times included Cindy Birdsong, Jean Terrell, Freddie Pool, Sundray Tucker and Lynda Laurence. In 2000, along with Lynda Laurence, Payne was a part of “Diana Ross’ Return to Love Tour”. Payne, who has also written two musicals and a number of screenplays and songs, has toured Europe and Asia extensively with the FLOS and performed on special occasions with her sister, Freda.

See how Scherrie Payne is related to other HistoryMakers
Click Here To Explore The Archive Today!