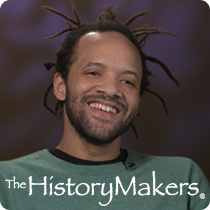 See how Savion Glover is related to other HistoryMakers
Donate Now

Tap dancer, choreographer and actor Savion Glover was born on November 19, 1973 in Newark, New Jersey. Glover began taking in music classes at Newark Community School of the Arts at four years old. He soon progressed to advanced classes, becoming the youngest student in the school’s history to receive a full scholarship. At the age of seven, Glover enrolled in tap dance classes, and was soon opening at festivals with such greats as Jimmy Slyde, Chuck Green, Honi Coles, and Buster Brown. In 1991, Glover graduated from Newark’s Arts High School.

Glover appeared on Broadway for the first time at ten years old in The Tap Dance Kid. He was featured in the title role when the production moved to the Minskoff Theater in 1984. From 1988 to 1989, Glover danced in Black and Blue, a Broadway musical revue of black Parisian culture in the interwar period. His performance earned him a Tony Award nomination for Best Performance by a Featured Actor in a Musical, and he was dubbed a “teen-age prodigy” by The New York Times’ dance critic Anna Kisselgoff. In 1989, Glover made his film debut dancing in Tap, alongside Gregory Hines. The following year, at the age of seventeen, Glover made his choreographic debut at the Apollo Theater’s Rat-A-Tat-Tap Festival in New York City, and began dancing on Sesame Street. Upon his graduation from Newark’s Arts High School, Glover portrayed the young Jelly Roll Morton, appearing again with Gregory Hines, in George C. Wolfe’s Jelly’s Last Jam. In 1996, Glover rejoined Wolfe to conceive, choreograph and star in Bring in da Noise, Bring in da Funk, a Broadway musical revue of black history. Glover returned to film in 2000 to portray the tap-dancing minstrel Manray/Mantan in Spike Lee’s satire, Bamboozled. He also appeared in the television biopic Bojangles (2001), Classical Savion at New York City’s Joyce Theater, and provided the choreography for the tap-dancing penguin Mumble in the animated movie Happy Feet (2006). Glover opened his tap school, The HooFeRzCLuB School for TaP, in Newark in 2009. He continued performing pieces such as SoLe Sanctuary (2011) and Om (2014) at the Joyce Theater, until reuniting with director George C. Wolfe as choreographer of the 2016 musical Shuffle Along, or, the Making of the Musical Sensation of 1921 and All That Followed.

In 1992, Glover became the youngest recipient of a National Endowment for the Arts grant. Glover was nominated for several Tony Awards for Bring in da Noise, Bring in da Funk, winning the Best Choreography Award, in addition to a Drama Desk Award.

Savion Glover was interviewed by The HistoryMakers on November 30, 2016.

See how Savion Glover is related to other HistoryMakers
Donate Now
Click Here To Explore The Archive Today!