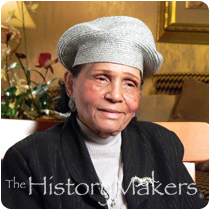 See how Sarann Knight Preddy is related to other HistoryMakers

Sarann Knight Preddy was born on July 27, 1920, in the small town of Eufaula, Oklahoma, to Carl and Hattie Chiles. Knight Preddy married her first husband, Luther Walker, just out of high school. In 1942, she and her family moved to Las Vegas, Nevada, settling in the black community on the West Side. Preddy took her first job at the Cotton Club as a Keno writer and later became a dealer.

In 1950, Preddy moved to Hawthorne, Nevada, where she was offered the opportunity to purchase her own gambling establishment; her purchase made her the first African American woman to own a gaming license in Nevada. Preddy then purchased the Lincoln Bar, which she later renamed the Tonga Club; the club was successful in the small booming town, and she operated the establishment until her return to Las Vegas in 1957.

Preddy then worked as a dealer until a new ordinance prohibited women from being employed as dealers. During that time, Preddy operated several businesses including a dry cleaner, a dress shop, and a lounge. Once the ordinance was repealed, Preddy returned to work as a dealer at Jerry’s Nugget where she remained for seven years.

In 1990, Preddy turned her focus to restoring the previous glamour of Las Vegas’ first integrated casino; she and her third husband, Joe Preddy, purchased the Moulin Rouge. Despite their best efforts, they were unable to secure the financing needed and eventually sold the Moulin Rouge to a developer. Preddy made many contributions to the state of Nevada through her involvement with the NAACP; she also worked to preserve the history of Las Vegas through her efforts to place the Moulin Rouge on the National Register of Historic Places.

Sarann Knight Preddy was interviewed by The HistoryMakers on April 4, 2007.

See how Sarann Knight Preddy is related to other HistoryMakers
Click Here To Explore The Archive Today!