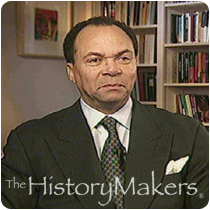 See how Sanford Cloud, Jr. is related to other HistoryMakers
Donate Now

Attorney and foundation executive Sanford Cloud, Jr. was born on November 27, 1944 in Hartford, Connecticut to Inez Morgan Cloud and Sanford Cloud, Sr. Attending Burns Elementary School, Northwest Elementary School and Northwest Junior High School, Cloud graduated from Hartford’s Weaver High School in 1962. After staring his college career at the University of Arizona, Cloud transferred to Howard University in 1964 where he came under the tutelage of Frank Snowden, Nathan Hare and Naylor Fitzhugh. Cloud graduated as student body president, worked in the office of Senator Thomas Dodd and married his college sweetheart in 1966. His twin sons, Adam and Christopher Cloud, were born as he graduated cum laude from Howard University Law School in 1969. In 1992, Cloud earned his M.A. degree in religious studies from Hartford Seminary.

Cloud worked briefly for Aetna Insurance in 1969 and then became the first African American lawyer to work at the firm of Robinson and Cole. In 1976, Cloud was elected to the Connecticut State Senate and formed his own firm, Cloud and Iberguen. Returning to Aetna in 1978, Cloud became vice president of public involvement in 1986 and headed the Aetna Foundation until1992. He became the eighth president and the first African American president and chief executive office of the National Conference for Community Justice (NCCJ) in 1994. Cloud represented the NCCJ as a member of former President Jimmy Carter’s delegation overseeing the first Palestinian elections in Jerusalem in 1996. Before retiring from the NCCJ in 2004, Cloud convened faith leaders to combat racism and advised the United States Customs Commissioner on racial profiling in the area of international air traveling.

Cloud has lectured at the University of Connecticut Law School. A former board member of the Independent Sector, The Council on Foundations and the Juvenile Diabetes Research Foundation, Cloud serves as director of Northeast Utilities, the Phoenix Company, Tenet Healthcare and Advest Incorporated.

See how Sanford Cloud, Jr. is related to other HistoryMakers
Donate Now
Click Here To Explore The Archive Today!