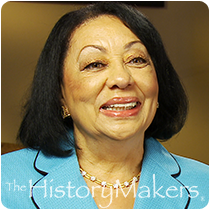 See how Sandra Miller Jones is related to other HistoryMakers

Marketing executive Sandra Miller Jones was born on August 6, 1946 in Winston-Salem, North Carolina. In 1968, Jones received her B.A. degree in sociology from Howard University, where she was a member of the Alpha Kappa Alpha Sorority. She then became the first African American woman to graduate from Northwestern University's Kellogg School of Business when she received her M.B.A. degree in 1971.

Jones helped establish the National Black MBA Association and the Chicago Minority Purchasing Council, and helped start a business initiative for the League of Black Women in Chicago, Illinois. She has served as board chair of the Jack and Jill of American Foundation’s WIN (We Invest Now) for Tomorrow, a program that teaches financial and investment skills to African American teenagers. She has also served on the boards of Family Services, Inc. and Summit School in Winston-Salem, as well as board chair of the Winston-Salem YWCA. In addition, she was active in women’s and youth activities at Goler Memorial AME Zion Church in Winston-Salem.

Jones is married to her business partner, Lafayette Jones. They have one daughter, Bridgette.

Sandra Miller Jones was interviewed by The HistoryMakers on August 14, 2014.

See how Sandra Miller Jones is related to other HistoryMakers
Click Here To Explore The Archive Today!