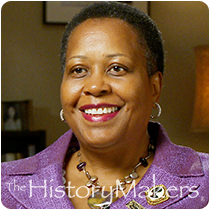 Journalist Sandra Dawson Long Weaver was born on June 25, 1952 in Annapolis, Maryland. She attended the University of Maryland, where she worked for the Black Explosion college newspaper and received her B.S. degree in journalism in 1974. She also worked as an intern for Newsweek, and went on to attend the Advanced Executive Program at the Northwestern Media Management Center.

In 2010, she established and became president and chief executive officer of the Dawson Media Group, a multi-media communications and consulting practice. Long Weaver left her position with Philadelphia Media Network in 2011, and went on to work as communications coordinator for United Methodist Communications and editorial director for the Tennessee Tribune. She created “Take 10 on Tuesdays” with the Tennessee Tribune, a weekly video series featuring African Americans in the Nashville area; and, in 2014, she launched Tea and Conversations with African American women, a networking and communications event.

Long Weaver is a founding member of the National Association of Black Journalists (NABJ), and has served for many years as chairperson and publisher for the Acel Moore Minority Career Development Workshop at The Philadelphia Inquirer. In 2011, she organized the first Founders Reception and the first “Divine Nine” breakfast for NABJ members. Long Weaver has served on the boards of African Women’s Development Fund USA and the Phillip Merrill School of Journalism at the University of Maryland. She also acted as the secretary-treasurer of the Pennsylvania Society of Newspaper Editors.

Sandra Long Weaver was interviewed by The HistoryMakers on April 23, 2014.

See how Sandra Long Weaver is related to other HistoryMakers
Donate Now
Click Here To Explore The Archive Today!