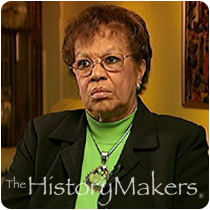 Favorite Color:
Yellow
Favorite Food:
Spaghetti, Ice Cream
Favorite Time of Year:
Spring
Favorite Vacation Spot:
Caribbean
Favorite Quote:
Do Unto Others As You Would Have Them Do Unto You.

Favorite Color:
Yellow
Favorite Food:
Spaghetti, Ice Cream
Favorite Time of Year:
Spring
Favorite Vacation Spot:
Caribbean
Favorite Quote:
Do Unto Others As You Would Have Them Do Unto You.

See how Sandra Johnson is related to other HistoryMakers

A versatile scholar, educator and administrator, Sandra Ford Johnson has been a proactive advocate for children with special needs. Born in Chicago in 1938, Johnson was one of the first African Americans selected to attend the University of Chicago's prestigious Laboratory School.

At the age of fifteen, Johnson enrolled at the University of Chicago, where she earned a B.A. in 1958. After graduation, Johnson moved to Los Angeles, where she taught in Hollywood and Studio City. Seeking new challenges, she moved to Heidelberg, Germany, in 1967 as part of the Department of Defense's Overseas Dependent Schools program. Johnson later earned her M.Ed. from the University of Southern California and in 1976 received her Ph.D. in educational administration from the University of Kansas, specializing in improving communication and networking in the public school system.

Johnson put her knowledge and experience to excellent use as assistant superintendent of the Washington, D.C. school system. As an administrator, she implemented programs in social work, school psychology, health, counseling, guidance and attendance for 140,000 students. Additionally, she created and produced Positive Plus, a cable TV program that featured school success stories. Johnson ultimately was promoted to state director for special education, with oversight of all policies and programs for students with disabilities in the District of Columbia.

In 1997, Johnson formed her own consulting company, SE3, providing services to both government and business. She has consulted and advised Native American tribes; performed research in Kenya for the U.S. Agency for International Development; and worked as a legislative liaison and public policy advocate for the National Association of Pupil Services Administrators. Her well-respected work also earned her an assignment in the office of New York Senator Hillary Rodham Clinton. Johnson lives in Washington, D.C., with her husband, Harry Johnson.

See how Sandra Johnson is related to other HistoryMakers
Click Here To Explore The Archive Today!