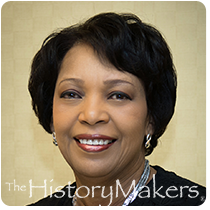 See how Sandra Hughes is related to other HistoryMakers

Journalist Sandra Hughes was born on October 18, 1946 in Durham, North Carolina. While her biological father was Alexander Cotton, she was raised by her mother Alice Marie Amis Daye, a housekeeper, and her stepfather Charlie Alfred Daye, an auto mechanic. Hughes graduated from Notre Dame High School in 1964 and went on to attend North Carolina Agricultural and Technical State University, where she earned her B.S. degree in English education in 1969.

Hughes worked briefly as a technical publications editor for Western Electric upon graduating, but was hired in 1972 as a general assignment reporter by WFMY-TV in 1972. She became the first African American woman to host her own daily talk show in the Piedmont, in 1974, with Sandra and Friends. In 1976, she was the first female broadcaster invited to participate in the European Communities’ Visitors Program. Hughes was the first African American woman in the Southeast to host the nationally syndicated PM Magazine, in 1978. She joined Lee Kinard in hosting the Good Morning Show in 1985. That same year, Hughes was appointed manager of WFMY-TV’s community affairs department, where she started the “2 Those Who Care” initiative in 1989. In 1990, Hughes returned to the newsroom as the 6 p.m. evening news anchor. She spearheaded the Minority Broadcast Development Program in 1992. Hughes retired from WFMY-TV in 2010, and began teaching at North Carolina Agricultural and Technical State University the following year as an adjunct professor of journalism.

Hughes received the Edward R. Murrow award for news reporting from the Greensboro Chamber of Commerce in 1981, and was the first African American in the Piedmont to receive the award. She was recognized by North Carolina Agricultural and Technical State University in 1995 as a Distinguished Alumnus. In 2002, she received the North Carolina Governor’s Order of the Long Leaf Pine, and July 24th of that year was proclaimed “Sandra Daye Hughes” Day by the Guilford County Commissioners. She has won multiple “Best of Gannett” awards for news anchoring and specific programs, and was named an “Unsung Hero” by the International Civil Rights Center and Museum in 2006. Hughes was given the Sojourner Truth Award by the National Association of Negro Business and Professional Women’s Clubs, Inc. in 2009, and the newsroom at WFMY-TV was renamed “The Sandra Daye Hughes Information Center” the following year. Also, in 2010, The National Academy of Television Art & Sciences inducted Hughes into the Silver Circle, the North Carolina Association of Broadcasters inducted her into the Broadcaster’s Hall of Fame, and she received an honorary doctorate of humanities from North Carolina Agricultural and Technical State University, her alma mater. Hughes received the Chuck Stone Lifetime Achievement Award from the National Association of Black Journalists in 2014.

Hughes lives in Greensboro, North Carolina with her husband. She has two children and two grandchildren. Hughes had a third child who passed away in 1984.

Sandra Hughes was interviewed by The HistoryMakers on August 13, 2014.

See how Sandra Hughes is related to other HistoryMakers
Click Here To Explore The Archive Today!