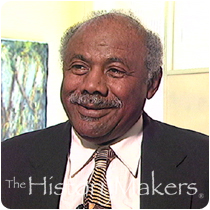 See how Samuel Yette is related to other HistoryMakers

Samuel F. Yette, the author of The Choice: The Issue of Black Survival in America, was born on July 2, 1929, in Harriman, Tennessee, to Frank Mack Yette and his wife Cora Lee Rector Yette (the family name is pronounced “yet”). Growing up in segregated Tennessee during the Great Depression, Yette attended Jamieson Elementary School in Harriman and Campbell High School in nearby Rockwood, Tennessee. Campbell High School principal John Brown Olinger mentored Yette, who graduated in 1947. After a brief interlude at Morristown College in 1947, he finished his studies at Tennessee State University from 1948 to 1951.

After joining the U.S. Air Force during the Korean War and serving from 1951 to 1953, Yette returned to teach and coach at Campbell High School from 1953 to 1954 and at Howard High School in Chattanooga from 1954 to 1955. Between 1954 and 1956, Yette worked as a sports writer for The Chattanooga Times and as a sports caster for WMFS radio. Yette completed his B.S. in English from Indiana University in 1956 and his M.A. in journalism and government in 1959. Also in 1956, Yette was teamed with photographer Gordon Parks as a special correspondent for a four part series on civil rights that appeared in LIFE Magazine. In 1956 he became a reporter for the Afro-American Newspapers in Baltimore and Washington, before serving as associate editor of Ebony from 1957 to 1959. That year, Yette was named director of information for Tuskegee University, where he remained until 1962. Yette covered City Hall for the Dayton Journal Herald as their first black reporter in 1962. Yette became the Peace Corps’ press liaison for Sargent Shriver’s visit to Africa in 1963 and was made the executive secretary of the Peace Corps in 1964. He was then appointed special assistant for civil rights to the director of the U.S. Office of Economic Opportunity, a position he held until 1967.

Becoming the first black Washington correspondent for Newsweek in 1968, Yette covered urban violence and began writing The Choice: The Issue of Black Survival In America. The Choice, published in 1971, was an African American insider’s view of the relationship between the Vietnam War, the War On Poverty and African American survival. For The Choice, Yette garnered a Special Book Award from the Capitol Press Club in 1971, and the Top Non-Fiction Work of Distinction from the Black Academy of Arts and Letters in 1972. Featured on PBS’s Black Journal, Yette lectured widely.

In 1972, Yette accepted a position as professor of journalism at Howard University while continuing to write columns and commentary for the Miami Times, Tennessee Tribune, Philadelphia Tribune, Richmond Free Press, Nashville Banner and the Afro-American Newspapers and for magazines like Black World, Black Scholar, Black Collegian and Black Books Bulletin. He founded Cottage Books, Inc., and republished The Choice in 1982. In addition, Yette was a political commentator for BET in 1987 and 1988 and hosted Talk TV Politics on WHMM-TV (now WHUT) from 1991-1992.

Yette was interviewed by The HistoryMakers on June 7, 2004.

Yette passed away on January 21, 2011, leaving behind two grown sons.

See how Samuel Yette is related to other HistoryMakers
Click Here To Explore The Archive Today!