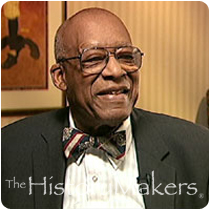 See how Samuel Myers is related to other HistoryMakers
Donate Now

University president, education advisor and economics professor Samuel Myers was born April 18, 1919, in Baltimore, Maryland to David and Edith Myers, Jamaican immigrants. He attended the city's segregated schools, graduating from Frederick Douglass High School in 1936. He enrolled in Morgan State College, but later took a semester off in order to earn money by working on a ship. In order to address the severe poverty that he witnessed on his travels, upon his return to Morgan State, Myers decided to major in the social sciences and graduated with his A.B. degree in 1940. He then earned an M.A. from Boston University in 1942 before being drafted to serve in the U.S. Army during World War II, rising to the rank of captain. After the war, he attended Harvard University, studying under John D. Black and John Kenneth Galbraith, and earned his Ph.D. degree in economics in 1949.

Myers began his career as an economist with the Bureau of Labor Statistics at the U.S. Department of Labor in 1950. He then spent thirteen years at Morgan State College as a professor and chairman of the Social Sciences Department, where Earl Graves, Sr., the future founder of Black Enterprise, was one of his students. Myers then joined the U.S. State Department as an adviser on inter-American affairs from 1963 to 1967. As president of Bowie State University from 1967 to 1977, Myers successfully diffused a nationally-publicized 1968 student boycott, expanded the curriculum and increased student enrollment. In 1977, Myers was chosen to lead the National Association for Equal Opportunity in Higher Education, where he helped persuade President Jimmy Carter to issue Executive Order 12232 in support of historically black colleges and lobbied Congress to pass Title III of the Higher Education Act.

From 1998, Myers served as chairman of Minority Access, an organization that seeks to recruit, retain and graduate minority students from predominantly white institutions. His numerous honors and awards include the Commandeur de L'Ordre National de Cote d Ivoire and the National Economic Association’s Samuel Z. Westerfield Award. Myers lives in Bethesda, Maryland, with his wife, Marion, and has three adult children, Yvette, Tama and Samuel.

Samuel Myers was interviewed by TheHistoryMakers on September 16, 2003.

See how Samuel Myers is related to other HistoryMakers
Donate Now
Click Here To Explore The Archive Today!