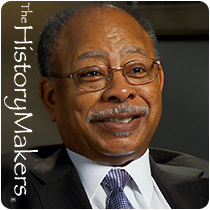 Favorite Color:
Black and Blue
Favorite Vacation Spot:
Virgin Islands
Favorite Quote:
There Is No Traffic On The Extra Mile.$A Good Name Is Better To Be Chosen Than All The Riches Of The World.

Favorite Color:
Black and Blue
Favorite Vacation Spot:
Virgin Islands
Favorite Quote:
There Is No Traffic On The Extra Mile.$A Good Name Is Better To Be Chosen Than All The Riches Of The World.

See how Samuel Howard is related to other HistoryMakers
Donate Now

Corporate executive Samuel Houston Howard was born on May 8, 1939 in Marietta, Oklahoma to Houston and Nellie Gaines Howard. Howard received his B.S. degree in business administration from Oklahoma State University in 1961, and his M.A. degree in economics from Stanford University in 1963.

From 1963 to 1967, Howard worked as a financial analyst with General Electric Company. In 1966 and 1967, he served as a White House Fellow and assistant to U.S. Ambassador Arthur Goldberg. From 1967 to 1968, Howard worked as director of educational computer services at Howard University and as a consultant to the U.S. Health, Education, and Welfare Department. He was then named vice president of finance, secretary and treasurer of TAW International Leasing Corporation, where he worked from 1968 until 1972. In 1972, he founded and served as chairman, president and CEO of Phoenix Holdings, Inc. and Phoenix Communications Group, Inc., which owned and operated broadcasting properties in Tennessee, Kansas and Mississippi.

Howard has been a member, board director or committee member of numerous organizations, including Southeast Community Capital; Nashville Electric Service; National Association of Corporate Directors; Nashville Chamber of Commerce; Federation of American Health Systems; Financial Executives Institute; National Easter Seal Society; National Urban League; Leadership Nashville Foundation; Project Reflect, Inc.; National Conference of Christians & Jews, Inc. (NCCJ); and United Way, among others. Howard was founder and director of 100 Black Men of Middle Tennessee, chairman of the board of the Urban League of Middle Tennessee, and trustee of Fisk University. He served on the Governor’s TennCare Roundtable in 1995 and the Boy Scouts Inner City Task Force Committee in 1988.

Howard was inducted into the Oklahoma State University School of Business Hall of Fame in 1983, and received the 1980 and 1984 Federation of American Hospitals President's Achievement Award. In 1994, he received the Nashville NAACP Branch Image Award for Lifetime Achievement and the NCCJ Human Relations Award. Howard received the Outstanding CEO Award among the 100 largest privately-held businesses in Nashville in 1997 and the Nashville Business Journal's 1995 Small Business Executive of the Year Award. He was honored as Nashvillian of the Year in 1998 by the Easter Seal Society of Tennessee and as Philanthropist of the Year in 1997 by the National Society of Fundraising Executives. In 2010, Howard received the White House Fellows John W. Gardner Legacy of Leadership Award.

Howard is the author of The Flight of the Phoenix: Thoughts on Work and Life, published in 2007.

Samuel H. Howard was interviewed by The HistoryMakers on April 24, 2014.

See how Samuel Howard is related to other HistoryMakers
Donate Now
Click Here To Explore The Archive Today!