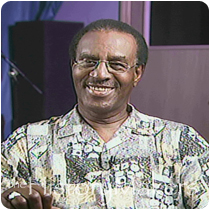 See how Samuel Gooden is related to other HistoryMakers

Samuel Gooden was born on September 2, 1934 in Chattanooga, Tennessee, the youngest of eight children. At age sixteen, Gooden began to perform at Chattanooga’s Triumph Church of God in Christ, where his father George was assistant pastor. Gooden and his twelve-year-old neighbor Fred Cash called themselves the Southland Jubilee Singers. In the evenings, they joined other teenagers on their block in singing rhythm and blues. In late 1950, Gooden joined the U.S. Army, where he served in Germany until 1953.

After returning from military service, Gooden joined Cash and their friends Arthur Brooks and Emanuel and Catherine Thomas to form an R&B group, Four Roosters and a Chick. They soon began to perform at Chattanooga nightclubs. In 1957, Gooden and Brooks decided to move the Roosters to Chicago, but Cash and the Thomas siblilngs remained in Chattanooga. Brooks’ brother, Richard, met a tenor at the YMCA in Chicago by the name of Jerry Butler. Butler was working a day job as a short-order cook. Butler’s partner in the Northern Jubilee Gospel Singers was Curtis Mayfield. When Gooden and Brooks move to Chicago, the group gained Mayfield and Butler and called themselves the Impressions. They released their first hit, “For Your Precious Love,” on Vee-Jay Records in 1958.

In 1959, after Butler left the group, the Impressions drove to Chattanooga to lure Cash back. Impressed with their success, Cash dropped out of Howard High School in the eleventh grade to join them in Chicago. The next year, Mayfield—the songwriter and leading force behind the group—encouraged Cash, Gooden, and the Brooks brothers to come to New York and record on ABC-Paramount. There, they released the 1961 hit “Gypsy Woman.” In February 1963, Mayfield, Cash, and Gooden decided to return to Chicago, while the Brooks brothers stayed in New York.

From 1963 to 1970, Gooden, Mayfield and Cash were the Impressions, scoring a number one hit with “It’s All Right” in 1963. That year, they also released their first full album, The Impressions. In 1964, they released the hit “Keep On Pushing,” followed in 1965 with the civil rights anthem “People Get Ready.” In 1968, they returned to the top of the charts with “We’re a Winner” and left ABC-Paramount to join Mayfield’s Curtom label headed by producer, Eddie Thomas. There, they produced two more albums before Mayfield left in 1970. Although Mayfield continued to serve as their occasional songwriter and producer, the Impressions remained on Curtom label through 1976.

The Impressions worked with vocalists including Leroy Hutson, Reggie Torian, Ralph Johnson, and Nate Evans after Mayfield’s departure. In 1991, the Impressions were inducted into the Rock and Roll Hall of Fame. After Mayfield’s tragic paralysis in 1990 and death in 1999, Cash and Gooden continued to perform, touring with Eric Clapton in 2001. Today, Cash, Gooden, and Willie Kitchens, Jr. perform as the Impressions. They are now based in Chattanooga, Tennessee.

Gooden lives in Chattanooga with his wife, Gloria, to whom he has been married since 1963. They have four grown children.

See how Samuel Gooden is related to other HistoryMakers
Click Here To Explore The Archive Today!