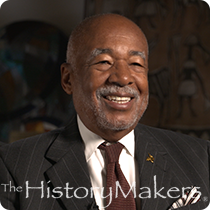 See how Samuel F. Morrison is related to other HistoryMakers

Librarian Samuel F. Morrison was born on December 19, 1936 in Flagstaff, Arizona. Morrison received his A.A. degree in English from Compton Junior College in Compton, California in 1955, his B.A. degree in English from California State University in Los Angeles, California in 1971, and his M.L.S. degree from the University of Illinois at Urbana-Champaign in Champaign, Illinois in 1972. Morrison completed his studies at the Harvard University Kennedy School of Government in Cambridge, Massachusetts in 1989.

Morrison served in the United States Air Force from 1955 until 1959. In 1972, he was hired as director of the Frostproof Living Learning Library. Two years later, he joined the Broward County Library System as assistant to the director and was promoted to deputy director in 1976. In 1987, Morrison was hired as chief librarian and deputy commissioner of the Chicago Public Library. Morrison was responsible for the planning, design, and initial construction phases of the Harold Washington Library Center. In 1989, Morrison became the director of the Broward County Library System, which received the accolade of “Library of the Year” by the Library Journal and Gale Research in 1996, under his leadership. The year previous, Morrison announced his goal of building the African American Research Library and Cultural Center, which opened in 2002. He retired in 2003.

Morrison was the chairman of the Greater Hollywood Arts Foundation, a trustee of NOVA Southeastern University, and served on the Broward County Children’s Service Council. He was a member of Southeast Florida Library Information Network, Bonnet House, Boys and Girls of Broward County, Gold Coast Jazz Society, and the NAACP. Morrison is an honorary life member of the American Library Association and the Florida Library Association.

Samuel F. Morrison was interviewed by The HistoryMakers on March 7, 2017.

See how Samuel F. Morrison is related to other HistoryMakers