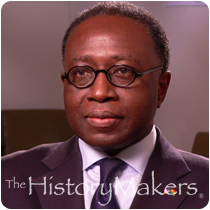 See how Samuel Akainyah is related to other HistoryMakers
Donate Now

Painter Samuel Akainyah was born in Ghana on September 5, 1953. His father was a Ghanaian Supreme Court justice, and his mother was a teacher. He was one of five children. Akainyah attended a boarding high school before moving to Chicago, Illinois, in 1975 and enrolling into the School of the Art Institute to study fine art and art history. He received his B.A. degree in 1979 and later received his M.A. degree. While in school, Akainyah completed a mural at St. Sabina Church, on Chicago’s South Side. Akainyah also received his M.A. degree in diplomacy and international law from the Graduate Committee on International Relations at the University of Chicago.

After graduate school, Akainyah began using his African history knowledge and his painting skills to create highly expressive paintings. In the early 1980s, one of his frescos was sold at a celebrity auction and later became a poster for the NAACP. A decade later, “Akainyah: The Art of Liberation,” became a traveling exhibition worldwide, paying tribute to Nelson Mandela and those who have died in South African prisons. In 1994, Professor Beverly Ross-Normand wrote and hosted a forty-minute television program for children entitled Initiations, which juxtaposed Akainyah’s painting of the initiation of Ghanian males against the rising gang subculture in America. A few years later, Akainyah became a faculty member in the humanities department at Kennedy-King Community College in Chicago. He has published three books including a 2008 autobiography.

Akainyah was honored by the City of Chicago and the State of Illinois when they proclaimed February 15, 1999, as Samuel Akainyah Day in Chicago. That same year, he was elected as the official artist of the Democratic National Convention in Chicago. In 2005, he presented the President of Ghana with an 11’ X 11’ painting entitled, From Whence We Came, valued at $80,000. A year later, he was named one of the fifty most influential African Americans in Chicago by N’Digo magazine. Akainyah has been a member of the Rald Institute and Ghana National Council of Metropolitan Chicago. He has also chaired the Black Creativity Art Competition at the Museum of Science and Industry.

Akainyah lives in Chicago and has his own art gallery. He is married to Kim Akainyah. They have three children.

See how Samuel Akainyah is related to other HistoryMakers
Donate Now
Click Here To Explore The Archive Today!