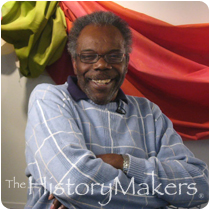 See how Sam Gilliam is related to other HistoryMakers
Donate Now

The career of painter Sam Gilliam has spanned decades and mediums, using paint, draped canvas and plastics to help influence numerous schools of art. Sam Gilliam, Jr., was born on November 30, 1933, in Tupelo, Mississippi, to Sam, a railroad worker and Estery, a maternal engineer. The seventh of eight children, Gilliam and his family moved to Louisville, Kentucky, shortly after he was born. As a child, Gilliam always enjoyed painting and was actively encouraged by his teachers.

In 1951, Gilliam graduated from Central High School and attended the University of Louisville. In 1955, he received his B.A. degree in fine art, and also held his first solo art exhibition. Gilliam entered the U.S. Army in 1956 and served for two years. Following his discharge, he returned to the University of Louisville. After three years of graduate school, Gilliam received his M.A. degree in painting in 1961. On September 1, 1962, Gilliam married Washington Post reporter Dorothy Butler in Louisville, and shortly thereafter moved to Washington, D.C.

In 1963, artist Thomas Downing introduced Gilliam to the Washington Color School, which was defined by bold colors. Two years later, Gilliam contributed his own innovation to the school by displaying unframed painted canvases, which allowed the work to flow naturally with the architecture of the display space. In 1971, Gilliam boycotted a show at the Whitney Art Museum in New York City in solidarity with the Black Emergency Cultural Coalition, in criticism that the museum did not consult black art experts in the selection of artists.

In 1973, Gilliam created for the San Francisco Museum of Art the free-standing piece Autumn Surf , which consisted of acrylic sheeting hung over wooden support beams to give the impression of waves. By 1975, he had moved away from draped canvases to geometric collages, most notably the Black Paintings and the White Collage Paintings. Also, in 1975, Gilliam created Seahorses, his first outdoor piece, for the Philadelphia Museum of Art. In 1983, Gilliam was featured in his first major retrospective at the Corcoran Art Gallery in Washington, D.C. In the new millennium, Gilliam has continued to work with birch plywood and metal forms as structural elements. Though his work is featured in galleries throughout the world and he is a self-sustaining artist, Gilliam is committed to teaching youth the foundations of art and has worked in numerous facilities including Washington, D.C., Public Schools, Carnegie Mellon University and the University of Maryland.

Gilliam has received honorary degrees from Northwestern University and the University of Louisville; a Norman W. Harris Prize from the Art Institute of Chicago; two National Endowment of the Arts Awards; and a Guggenheim Fellowship.

Gilliam’s studio is located in the historic Shaw neighborhood in Washington, D.C. He and his ex-wife have three daughters (Stephanie, Melissa and Leah) and three grandchildren.

See how Sam Gilliam is related to other HistoryMakers
Donate Now
Click Here To Explore The Archive Today!