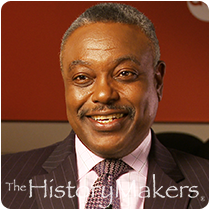 Television news reporter Sam Ford was born on May 29, 1953 in Coffeyville, Kansas to construction worker Sammie Ford and laundry worker Kathleen Owens. In 1974, Ford graduated with his B.S. degree in journalism from the University of Kansas. While at the university, he began his career in media with a job as a disc jockey at the college and local radio station.

Ford’s career soon made the transition into news journalism, and, in 1974, Ford was hired as a reporter/announcer on both KSJN Radio (a Minnesota Public Radio station) and KMSP-TV (an ABC affiliate television channel). He then studied journalism at the graduate level at the University of Minnesota-Twin Cities, and worked as a reporter at WCCO-TV, where he wrote and produced the first of many African American history TV features of his career. In 1975, Ford was one of the forty-four founding members of the National Association of Black Journalists in Washington, D.C. He spent nine years as a reporter for CBS News, before moving to Washington, D.C. in 1987 to work for ABC News. Ford worked his way up the ranks at ABC News, and was promoted to bureau chief for the NJLA-TV/ABC7 Network.

Ford has produced several television features on African American issues, including Black Slaves, Red Masters (1990), and the Emmy Award-winning African American Connection (1991). In 2003, he traveled to Nigeria to explore his Yoruban ancestry; the resulting TV feature, Journey to Africa, garnered a Broadcast Excellence Award from Columbia University. Ford is active in the Prime Movers Media mentorship program at Ballou High School in Washington, D.C., where his work with aspiring journalism students earned him another Emmy for the news special Field Trip to Ballou (2006).

Ford is married to freelance reporter and media manager Gloria Murry; they have a son, Murry Ford, and a daughter, Gina Ford.

Sam Ford was interviewed by The HistoryMakers on December 3, 2013.