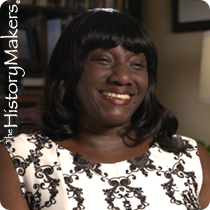 Chef and culinary historian Sallie Ann Robinson was born on August 4, 1958 on Daufuskie Island, South Carolina to Albertha Robinson Stafford and Alton Ward, Sr. She attended Mary Fields School on Daufuskie Island. Robinson was featured as the character Ethel in the 1972 memoir, The Water is Wide written by her teacher Pat Conroy. She then moved to Savannah, Georgia, to attend Bartlett Middle School, but returned to South Carolina, where she graduated from Bluffton’s H.E. McCracken High School in 1975.

After living and working at the William Hilton Inn on Hilton Head Island, Robinson moved to Philadelphia, Pennsylvania. There, she became a licensed practical nurse for BAYADA Home Health Care before returning to Daufuskie Island. In 1991, Robinson began working as a home health care nurse and as the secretary and manager of a cleaning company. Encouraged by a client, she began collecting recipes and stories of the Gullah community for a cookbook of foods from her childhood. Robinson worked with other natives of Daufuskie Island during the late 1980s to launch Daufuskie Island Day, which was observed on the fourth Saturday in June. In 2008, Robinson created the Daufuskie Island Tours. She also served a council woman on the Daufuskie Island board. She went on to work as a personal chef, and private culinary instructor. She was also featured on numerous television shows for her culinary skills including The QVC Show, The 700 Club, CN8’s Your Morning Show and the Food Network. In 2010, Robinson was invited to give a presentation and dinner on the cuisine of the Gullah peoples at the Smithsonian Institution for attendees from West Africa and Ghana.

Robinson’s first book Gullah Home Cooking the Daufuskie Way was published by the University of North Carolina Press in 2003. Then, in 2006, she released Cooking the Gullah Way, Morning, Noon, and Night. Robinson was highlighted in many publications including Southern Living, National Geographic, Hilton Head Monthly, The South Magazine, Garden and Gun, and Bon Appetit.

Sallie Ann Robinson was interviewed by The HistoryMakers on February 9, 2017.