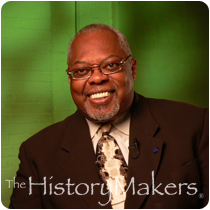 Favorite Time of Year:
Spring
Favorite Vacation Spot:
San Francisco, California
Favorite Quote:
Power Concedes Nothing Without a Demand. It Never Has, and It Never Will.

Favorite Time of Year:
Spring
Favorite Vacation Spot:
San Francisco, California
Favorite Quote:
Power Concedes Nothing Without a Demand. It Never Has, and It Never Will.

See how Sala Udin is related to other HistoryMakers

Politician and activist Sala Udin was born Samuel Wesley Howze on February 20, 1943 in Pittsburgh, Pennsylvania to William and Mary Howze. Raised in the Hill District of the city, he was one of eleven children. In 1961, Udin graduated from Port Richmond High School in Staten Island, New York and joined the Freedom Rider campaign that same summer.

Upon his return from the segregated South, Udin served as the president of the State Island Chapter of the NAACP for three years. In 1963, Udin took a group of college students to hear Dr. Martin Luther King, Jr. give his “I Have A Dream” speech at the March on Washington. The following year, he worked for the Mississippi Freedom Summer Project registering voters in Holmes County. The next year, in 1965, Udin co-founded the Centre Avenue Poets’ Theatre Workshop in his childhood neighborhood of the Hill District with friends and renown playwrights, August Wilson and Rob Penny. By 1967, Udin had become a strong advocate of Black Power attending numerous conferences and started the performing arts company, Black Horizons Theatre, modeled after Amiri Baraka’s Spirit House. Over the next four years, the company produced plays reflective of the Black Arts Movement and used black playwrights such as Sonia Sanchez, Ed Bullins, and Amiri Baraka. The programs were held in the Leo A. Weill School. Additionally, Udin helped to establish a Black Studies program at the University of Pittsburgh and published articles in The Pittsburgh Courier entitled, “Afrikan View.”

Beginning in 1968, Udin had numerous run-ins with the law including gun charges and driving without a valid license. In 1970, he was indicted in Louisville, Kentucky for illegal transportation of firearms and possession of distilled spirits. Sentenced to five years at a federal penitentiary, he began serving his sentence at the Lewisburg Federal Penitentiary in 1972. Seven months later, he was paroled. In 2006, he attempted to have his sentence pardoned.

Throughout the mid-1970s, Udin worked in social service agencies including as Executive Director at the House of Crossroads, a drug treatment facility and the Multicultural Resource Training Center in San Francisco. He moved back to Pittsburgh in 1992, and ran for City Council in a special election in 1995. He served as Councilmen for the Sixth District, his childhood neighborhood for ten years. As a councilman, he introduced legislation to establish a Citizen’s Police Review Board and sat on numerous committees including the Plan B Oversight Committee, which helped to provide jobs to women and minorities; the Housing Authority: City of Pittsburgh Board; and the Disparity Study and Implementation Commission.

In 2005, Udin lost in the primary to former employee Tonya Payne. Udin advocates the improvement of the Sixth District and was instrumental in the creation and maintenance of the Freedom Corner, a civil rights monument located in the Hill District neighborhood.

Udin was interviewed by The HistoryMakers on August 12, 2008.

See how Sala Udin is related to other HistoryMakers
Click Here To Explore The Archive Today!